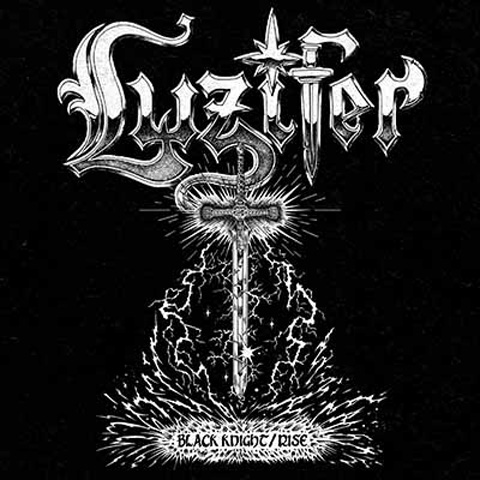 Luzifer, a side project of German thrashers Vulture, were originally formed in Hamm/North Rhine-Westphalia in the year 2009 by Steeler (vocals, bass) and Genözider (vocals, guitar, drums). In 2015 their Rise EP was released, followed by the Black Knight EP in 2015. Both 7” singles have been unavailable for quite a few years and have now been re-issued on this mini-album. It is nice that Luzifer is so popular with the fans, finds Steeler.After all it is only a side project. But we are delighted that sales are so good. In the end it’s not in our hands if Luzifer will get as big as Vulture, or maybe even bigger. We are not actively pushing the band. Luzifer does not play live shows and we don’t have any social media accounts. After all we would probably prefer if Luzifer stays totally underground. We are keeping a low profile for sure. According to band members Steeler and Genözider Luzifer have been influenced by Angel Witch, Witchfynde, Ritual, Warlord, old Manowar, Heavy Load and Mercyful Fate, with a bit of German krautrock thrown in for good measure. With Black Knight our focus was a bit more on the vocals, states Steeler, with Rise having been more riff-heavy. The songwriting on the second single was certainly more polished and more demanding, sort of a natural progression. Rise on the other hand was really spontaneous: recorded in the rehearsal room with the lyrics having been written shortly before the recording button was pressed, that sort of thing. In comparison to that Black Knight was a bit more elaborate. The artwork of the Black Knight 7” looks like a typical NWOBHM artwork to me, reminding me of bands like Crucifixion. We wanted something in the Bakshi style and think that there is nothing wrong with the end result.