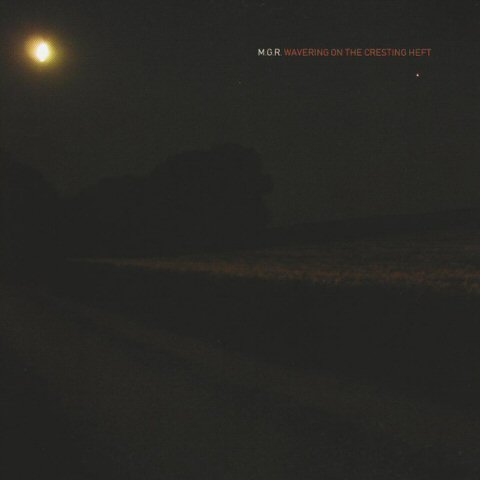 Wavering On The Cresting Heft is the second solo recording from Isis guitarist Michael Gallagher under the moniker MGR. MGR is an acronym for Mustard Gas and Roses, which is taken from Vonnegut’s classic novel Slaughterhouse-Five. This 2007 full-length follows Gallagher’s debut MGR offering, 2006’s Nova Lux. If one were to loosely describe the music of MGR, an appropriate description would fall under the post-rock classification. And while there are similarities, MGR dabbles in a bit more abstract style than those artists. The album mixes the ambience of This Will Destroy You, the guitar-driven sounds of Isis, and the drone of Sunn0))). The album opener, “Allusions,” is a good example of this. Swirling effects and soft guitar tones create a soundscape that could provide the soundtrack to a trip to outerspace. In addition it makes use of the string arrangements of the Capricollis Quartet; the cello, violin, and viola add a very ominous vibe to the music. The music that Gallagher creates throughout the album follows these loose guidelines of ambient post-rock. “It Darkens His Door” leans a bit darker with the dirge of metal riffs. “Ruminations Of Before,” on the other hand, focuses on the use lush guitars. Its really not hard to imagine them as the backdrop to a an independent film. “The Night Splits, Wide And Open” follows with an excellent building sequence before climaxing just over the seven-minute mark. “And It Falls, By The Gallons” closes out the album and is reminiscent of the work of Isis, minus Aaron Turner’s vocals. MGR’s sophomore effort Wavering On The Cresting Heft is definitely a step up from the last recording. I found the debut offering to be rather disjointed and a bit too abstract. While not entirely focused or tapped into traditional songwriting structures, this album is much easier to listen to than its predecessor. Isis/Hydra head/Neurot nerds should pick this up if you haven’t yet.

Track list:
1. Allusions
2. It Darkens His Door
3. Rumantions Of Before
4. Equilibrium
5. The Night Splits, Wide And Open
6. And It Falls, By The Gallons