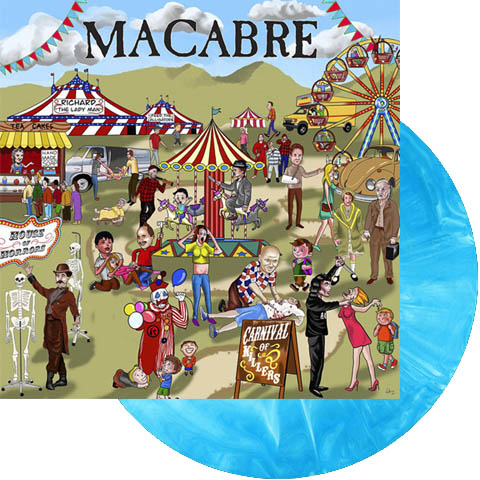 Come one! Come all, to the demented, heinous bloodbath of a murder metal circus that declares Macabre’s return; Carnival Of Killers. As Macabre’s first full length album in almost 10 years since the release of Grim’s Scary Tales in 2011, and just in time for their 35th anniversary as a band, this latest installment to the catalogue will butcher your ears and derange your psyche as to be expected! Judging by the title, one can positively assume Carnival Of Killers contains stories of your favorite murderous psychos: Bundy, Speck, Gacy, Ramirez, and a slew of heinous killers never sung about by Macabre, before now. The album artwork, designed by Corporate Death (Lead Singer Lance Lencioni) and artist Laz Gein presents a Where’s Waldo style illustration of a colorful carnival filled with jovial children on rides, all amidst a slew of the album’s most memorable references: Bundy waving a woman over to his Beetle with his cast, H.H. Holmes displaying medical skeletons to passers by, Bittaker and Norris hammering their latest victim in the face in public instead of in front of a camera… a touching, family oriented, thrill filled weekend! In true Macabre fashion, a morbid sense of humor, as well as a refinedvtaste in true death metal are most definitely required to appreciate the gruesome lyrics and the switches between complex guitar work, and bouncy, addictive themes. Prepare for another gore filled thrill ride from a band that originated in the 80’s, yet progresses to the edge of modern metal with clear production, expanded variety, and with a whole mess of nostalgic pleasure.