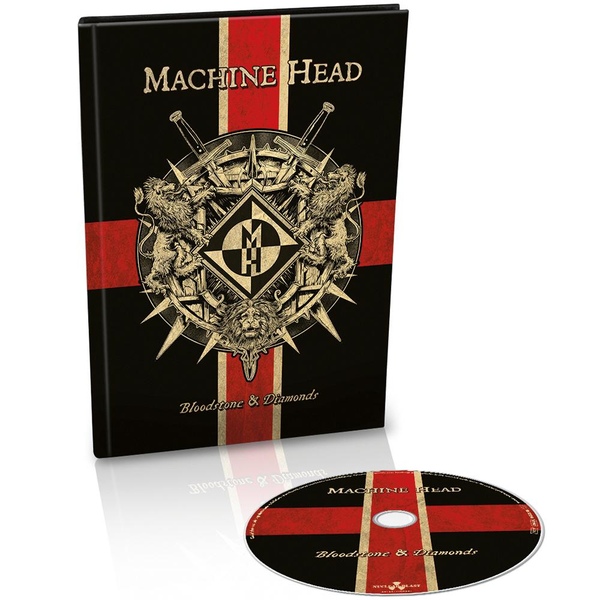 Limited digipack in A5 cover

Regarding the title on Machine Heads 2014 album, Bloodstone And Diamonds, Flynn said: Without getting too philosophical on ya, bloodstone and diamonds represent two of the hardest materials on earth. It is also a lyric from the opening track of the album, Now We Die. In many cultures, the bloodstone has been used as an amulet to protect against evil, and is the symbol of justice. Diamonds are the hardest natural material on earth (which is how we feel about our music), and it also represents the diamond logo I drew 22 years ago (in my wifes apartment on Dover St. in Oakland) that has become the symbol for the band. Speaking about the musical direction of the album, Flynn said: There’s definitely a lot of urgency on this record. Its a really heavy record arid theres a dark and evil vibe to a lot of it, but I feel like theres more of a rock vibe in there too. Its stripped down at times, and I like that. I think that sense of urgency has carried over from the demos we did, which were all done very quickly and spontaneously. We tried to keep that spontaneous vibe on the album. He continued: At one point we started getting really anal on the tracks and spending tons of time on stuff, and wed listen back and say, You know what This doesnt have the vibe of the demos. The demos were so fuckin frantic, so we changed our mindset and now its a little bit looser. Some of the guitar takes are basically live. Often, 40 or 50 percent of a song came from a spontaneous, live take and thats killer! It adds energy and makes the songs feel alive.