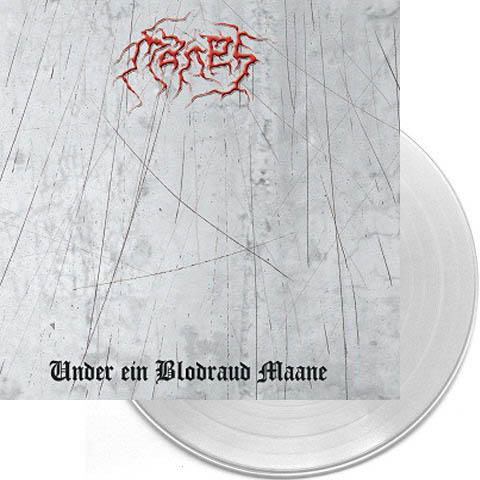 Norwegian black metal, you say? Well, lets give it a shot shall we. Manes are a now infamous band, but for all the wrong reasons. Starting out, Manes were a Scandinavian black metal band with a tremendous reputation for creating a repertoire of successful works, especially the debut full-length, which is what we?re dealing with in this instance. When ?Under ein Blodraud Maane? came out in 1999 through Hammerheart Records, many believed the career of this Norwegian act would really begin to take off, but instead, it stalled. Norway, by this stage of the decade, were beginning to lack that cutting edge, that thrust that managed to pull the likes of America, France and Germany into the top ranked nations for producing talented black metal bands with distinctive sounds. As the years passed by, Manes developed their sound and thus invited experimentation into their lives by, and rather oddly I must say, changing their style from straight up black metal to an apparent electronic/jazz influenced band. Now, I?ve never actually listened to any of the material beyond this stage of Manes? career, but the general gist of it is, it?s awful. Whilst that may be the case, let us not dwell on it too long as comparisons cannot be made and we?re dealing with THE successful Manes era in the form of the brilliant work of art, ?Under ein Blodraud Maane?. Black metal is a highly formulated genre. When the second wave hit our ears, the distinctive style that was created by the likes of Darkthrone in the form of ?Transilvanian Hunger? and Burzum, in the form of the self-titled effort, ?Burzum? was effective but as time ticked by, black metal acts were forced to think again and began to produce music that kept some of the traditions that began it all, but with an emphasise on experimentation. Manes can be considered one of the Norwegian bands that put Scandinavia, and particularly Norway herself, back on the map. It was the creation of ?Under ein Blodraud Maane? that inspired many to delve deeper into the roots of black metal and the future of the genre, as a whole. Manes? debut effort is impressive. It sticks to a certain amount of traditional elements and gives them a much needed facelift with an inclusion of some fresh and interesting elements, much of which are provided by the awe inspiring programming and synthesizer usage. Comparisons are likely to be made to a number of the second wave bands, as the previous reviewer has done and some are certainly justifiable. As the previous reviewer kindly stated for me, the use of the keyboards links to an important band within the genre, the much loved and much praised Limbonic Art whom, personally, I don?t much like. Although that may be the case, I can appreciate the apparent influence on Manes? keyboard sections, which are utterly astounding and the main positive to take away from the record. Whilst, of course, the rasping vocals or the tremolo riffs may take credit for much of the direction of the record, it?s the subtlety of the keyboards that impresses. The soundscapes wouldn?t be as wonderful if it were not for the inclusion of the keyboards, which contain symphonic elements and are productively creating there own blend of melodies whilst the lead guitars wrap themselves around the creative juices that the keyboards begin to flow through the record. It seems that much of the inspiration behind the deceptively emotive guitars is based around the diversity that the keyboards bring to the foreground. Take songs like ?Uten Liv Ligger Landet Øde? or the title track, ?Under ein Blodraud Maane?. It is songs like these that display the brilliance that is the keyboards and how they allow the other aspects of instrumentation to attach themselves around it and feed off it. The keyboards are truly immense and the main element of ?Under ein Blodraud Maane? that one must pay particular attention to. Much of the debut is decisively deceptive. The tremolo riffs disguise what is actually an often slow paced affair well. The soundscapes are built gradually on the foundations that the keyboards often lay down. Vocally, Manes don?t provide anything we haven?t heard before, but the mixture of symphonic melodies and harsh undertones are an idyllic basis for the vocals to work the aggressive angle that Manes wish to portray on occasions. One would go as far to say that ?Under ein Blodraud Maane? is a spectacular and sublime effort of controlled black metal madness. The tortured emotions that subtly etch themselves into our minds are dark and depressive, but never overbearing. This isn?t a depressive black metal record, let it be known. In terms of the production, like the sludge genre would do, it?s murky. This allows the different elements of the soundscapes to manipulate the audience in whatever they want. Whilst the piano interludes are pulling you in one direction, the dismal tones of the bass are pulling you in another. This seems to me to be a lost gem of Norwegian black metal art.