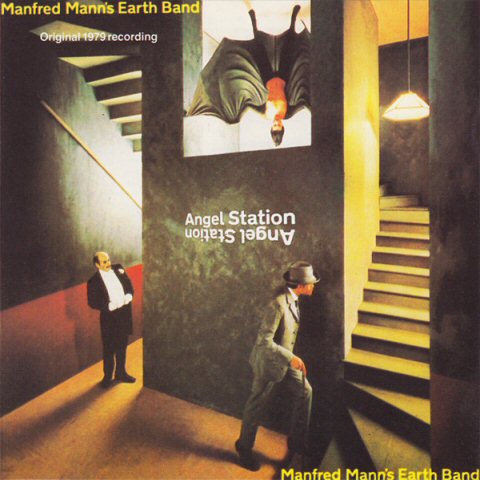 Vocalist Chris Thompsons last album with Manfred Mann’s Earth Band is dressed up in Manns beautiful keyboards. Angel Station has some key moments — You Angel You, a Bob Dylan tune that sounds nothing like Dylan, and not the way their Top Ten version of Quinn the Eskimo/The Mighty Quinn was reinvented. You Angel You has a strong hook with topnotch Anthony Moore production work, and it melts into the title track of Harriet Schock’s landmark Hollywood Town album, the source of Helen Reddy’s Ain’t No Way to Treat a Lady. The Manfred Mann version is interesting, and explores the possibilities of the composition, though Schock’s version is perfect country-pop and hard to top. It is nice to see a rock band with such good taste. Angelz at My Gate, co-written by Manfred Mann, leads off side two and is another dreamy angel tune. It sounds mysteriously like Games Without Frontiers, the Peter Gabriel radio hit from his 1980 third self-titled solo album. Now since this was released the year before, do you think Gabriel found inspiration from the grooves of Angel Station? While artists like Gary Wright and Jordan Rudess overwhelm you with the keyboards, Manfred Mann’s are indeed the lead instrument, but he uses them to augment the vocals, not to overpower. The John Shaw-photographed album cover looks innocent enough until you turn it upside down — there a female dark angel, in open black cape, exposes her breasts. So blatant, but upside down it probably went right by many retailers, and with no hit single, it probably didn’t cause too much of a stir. It’s interesting that, like Gary Wright, the Earth Band recorded for Warner Bros., yet both acts only eked out a couple of hit singles. As with Wright’s Headin Home LP, this 1979 album has more than its share of good material, both keyboard players being intuitive artists with credentials and past chart success. Despite good performances on Heron’s Don’t Kill It Carol and a simply wonderful cover of Billy Falcon’s 1978 release, Waiting for the Rain, this is yet another album that deserved a better fate. The rendition of the Falcon tune may be the best performance of one of that singer’s compositions ever. The two Manfred Mann songs on side two are excellent: You Are – I Am is good and pleasant while Resurrection has lyrics that display clever sarcasm and religious — or sacrilegious — overtones. Angel Station is well-crafted music by an industry veteran.