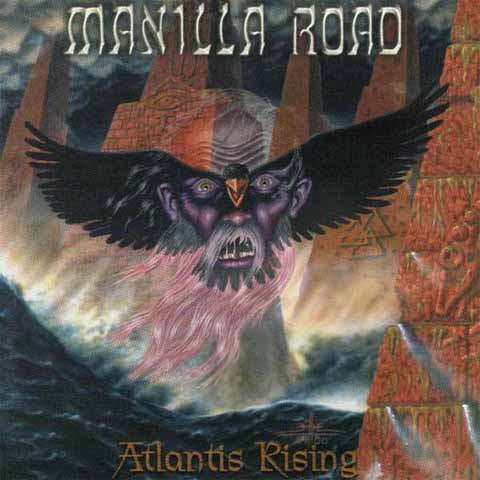 2001’s Atlantis Rising wasn’t just Manilla Road’s stellar comeback following a ten-year retirement; it was one of the finest albums of the cult-heavy metal heroes’ long career. Not since mid-’80s triumphs like Crystal Logic, Open the Gates, and The Deluge had vocalist and guitarist extraordinaire Mark Shelton made his often inimitable brand of fantasy metal sound as vibrant, fresh, and, of course, epic! A concept album, naturally, Atlantis Rising unravels its curiously assembled tale (more on that later) over no less than four “books,” whose average track runs upward of six minutes, but, with the possible exception of the somewhat ponderous “Decimation,” almost never overstay their welcome. What’s more, multi-faceted standouts like “Megalodon,” “War of the Gods,” and the title track regularly achieve a perfect balance between heritage metal’s stately magnificence and quasi-thrashing intensity (the oft-frenetic “Siege of Atland” bucks the trend to focus mostly on the latter). Both the late-arriving head-banging anthem “March of the Gods” (which confirms the album’s high standards throughout) and the top-notch dark ballad “Sea Witch” figure as highly as most any other classic in Manilla Road’s long oeuvre, and afford the by-now expected (but always welcome) showcases for Shelton’s heroic guitar work. First timers may take issue with his acquired-taste semi-operatic vocals (especially displayed by the acoustic interlude “Flight of the Ravens”), which are never as effective as his habitual snarling style, but old timers will know that a little good-willed complicity goes a long way toward enjoying not only this curiosity, but many of Manilla Road’s more over-the-top traits. Speaking of which, for a guy who’s always written far-fetched lyrics inspired by the realms of myth, Atlantis Rising really goes for bust by linking together stories of completely different origin — the legend of Atlantis, the Cthulu mythos, Greek and Norse deities alike — like some outrageously mishmash omnibus. But then its story line is obviously not geared for accuracy — it’s just entertainment, folks! Even more than that, Atlantis Rising sure speaks volumes about the benefits of taking some time and recharging one’s creative batteries.