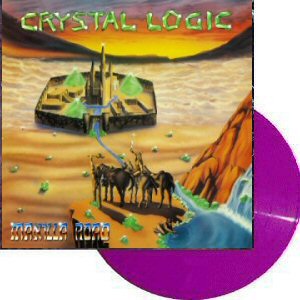 After experimenting with all manner of hard, progressive and space rock sounds on their first two albums, Wichita, KS Manilla Road would finally embrace heavy metal wholeheartedly — and start defining the epic formula that would become their trademark — with their third, 1983’s Crystal Logic. But that’s not to say they got boring with their songwriting. Anything but, as selections varied from brisk, economical singles like “Feeling Free Again” and “The Ram,” to more elaborate offerings in the title track and album standout “The Veils of Negative Existence,” to the full-blown, 12-minute epic metal adventure of “Dreams of Eschaton/Epilogue.” The latter, in particular, revealed an evident debt to New Wave of British Heavy Metal bands like Iron Maiden and Angel Witch (in fact copping a riff from their classic “Angel of Death”), and therefore, won’t sound unfamiliar to fans of Manilla Road contemporaries such as Armored Saint or Queensrÿche — all of which had indeed drunk from the same wellspring. But what set Manilla Road apart from these bands was a hard to define, explorative innocence that only their geographical isolation could possibly explain. One of these quirks, leader Mark Shelton’s warbling, somewhat nasal vocal style might not sound brittle enough to get over with some extreme metal fans; but his slashing guitar playing is simply beyond reproach, boasting an inventiveness and electrifying attack worthy of the era’s best major market heavy metal guitar heroes. Ironically, Shelton’s singular talents probably found their best showcase in non-album single “Flaming Metal System,” which was originally featured on Shrapnel Records’ U.S. Metal, Vol. 3 sampler, but was later added to most CD reissues of Crystal Logic. And it was this final and belated ingredient that helped transform the album into an all around tour de force, which remains one of Manilla Road’s finest albums.