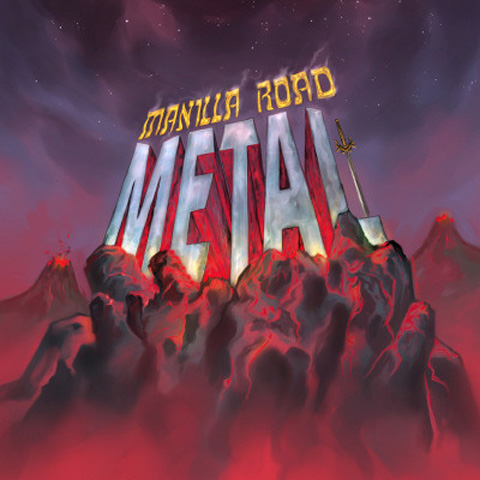 Despite its suggestive title and the band’s subsequent heavy metal legacy, Manilla Road’s first album, Invasion, had owed far more to the progressive space rock of late-70s Rush (as well as, curiously, the earthy hard rock of Montrose) than anything as metallic as Black Sabbath or Iron Maiden. But, after shelving a full album’s worth of somewhat laid-back, very proggie material (originally named The Dreams Of Eschaton, and eventually released in 2002 as Mark Of The Beast), Manilla Road proclaimed their intentions in no uncertain terms with their second official release, 1982’s Metal. At least lyrically — via the almost stupidly direct metal anthem-y of “Enter the Warrior” and the title cut — because, from a musical perspective, their creations still lagged behind their ambitions somewhat. The self-explanatory “Out of Control With Rock’n’Roll,” for instance, was more accurately described as plain American hard rock, rather than metal, and the new, shorter, space rock-free version of first-album nugget “Far Side of the Sun” still sounded like Rush, only this time around it seemed to cop from “By-Tor and the Snow Dog” instead of “2112.” The wonderfully cheesy lyrics to “Defender” were obviously inspired by the classic arcade video game (and, at two minutes, lasted about as long as most quarters plunked into the ultra-challenging game); “Queen of the Black Coast” saddled a rollicking metallic stomper with a swashbuckling tale of buggery on the high seas; and modern listeners would be forgiven for mistaking “Cage of Mirrors,” with its hysterical invocation of “Lucifer and his Warriors” over muted guitar pickings, for a Tenacious D comedy tune. Ah, but these were simpler times, and a grain of salt therefore comes standard. In the end, Metal was a transitional album for a band whose entire, ever-evolving career trajectory could, in truth, be called transitional; but it also happened to be one of the weaker links in that trajectory, and one which wasn’t helped by the still terribly inefficient and rudimentary recording conditions affecting its creation.