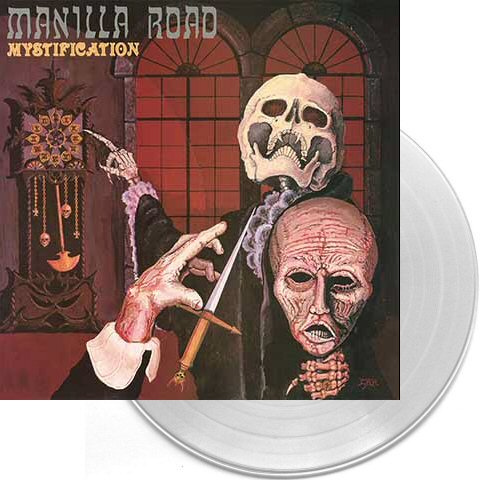 As they approached the late ’80s, Manilla Road were coming off a string of landmark heavy metal releases, which arguably still embody the strongest phase of their career, when they decided it was time to try a few new things on the advice of their then record label, Black Dragon. Leaving their Wichita, KS, home base for Memphis, TN, and soul legend Al Green’s studios, they took a chance on working with an outside producer once again in R&B specialist Paul Zaleski during the convoluted sessions that eventually fashioned 1987’s Mystification, their sixth studio album. Rumored improprieties aside (the band accused the studio of cutting commercial jingles on their dime and recording time), suffice to say that the veteran trio came away unhappy with both the experience and the end result, as reflected in the music here. “Up from the Crypt,” “Valley of Unrest,” and “Death by the Hammer” are very ordinary thrashers, and more traditional, mid-paced metal fare like “Haunted Palace” and “Masque of the Red Death” hungers for a little more character, their fragile links to the band’s majestic metal legacy proving a tad too recycled for comfort. And that’s where bandleader Mark Shelton’s stirring guitar work often comes to the rescue, spinning beautiful melodic yarns across the near epic “Children of the Night” and the Haley’s Comet-inspired “Dragon Star,” while additional album standouts such as “Spirits of the Dead” and the title track finally display the clever combination of melodic savvy and compelling oft-spiritual lyrics to get them through. In the end, however, it’s probably the fact that more than half of these songs are named after and inspired by the works by Edgar Allan Poe that qualifies as the album’s biggest curiosity, though the fact that they possess no other interconnecting link among themselves and are organized smack dab in the middle leaves a feeling of unfinished business about them. Even so, for all its evident drawbacks, Mystification was the last remotely “classic”-sounding Manilla Road album fans would hear for some time, and it will not disappoint loyal followers of the group.

Track list:
1. Haunted Palace
2. Spirits Of The Dead
3. Valley Of Unrest
4. Mystification
5. Masque Of The Red Death
6. Up From The Crypt
7. Children Of The Night
8. Dragon Star
9. Death By The Hammer