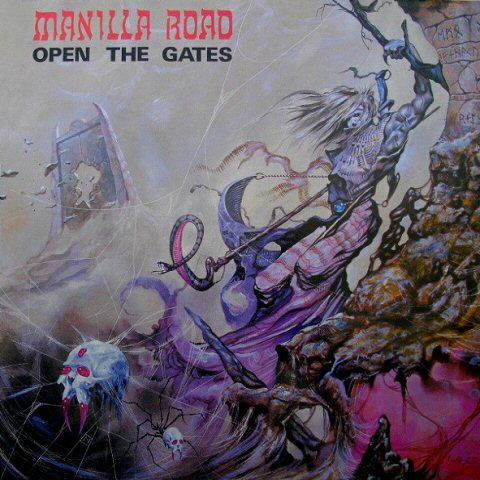 Having made incredible strides while experimenting with several hard rock subgenres on their first three albums, Manilla Road appeared set to delve further into the fantasy-laced niche of epic heavy metal that had dominated 1983’s Crystal Logic with its 1985 successor Open the Gates. Easily their heaviest, hardest-hitting, and most focused effort to date, the album clearly benefited from the arrival of powerhouse new drummer Randy Foxe, who provided a more limber and muscular attack behind the kit, and helped founders Mark Shelton (vocals/guitar) and Scott Park (bass) infuse Manilla Road’s sound with the thrash-affected techniques that were popular of mid-’80s. Only a few cuts (“Heavy Metal to the World” and stunning opener “Metalstorm”) resorted to all-out thrash, however, as the retooled trio continued to take the bulk of their cues from heavy metal’s formative founders of the ’70s and more recent New Wave of British Heavy Metal champions like Iron Maiden and Saxon. In fact, the latter’s influence is particularly strong (to discerning metal geeks, anyway) in the growled narrations opening and closing the album, and the guitar licks shot through the near-ten-minute sprawl of “The Ninth Wave” (originally featured with “Witches Brew” as a 12″ vinyl bonus disc), which recalled Saxon’s “The Eagle Has Landed.” As for lyrically, Shelton was diving deep into his esoteric, mythological and sci-fi readings, with Arthurian legends providing the backbone to many of the compositions cited above, as well as the excellent, all-too-brief title cut. Another standout, the evocative semi-ballad “Astronomica” took a detour into outer space, but the suite of songs comprising the album’s second half were almost entirely based on Norse legend, and included such highlights as the deliberate march of “The Fires of Mars” and cathartic soloing coda of “Witches Brew.” In the end, the only thing that sounded amiss on Open the Gates (though not enough to derail the overall stellar results) was Shelton’s voice, since he reportedly had to record all his vocals in a single night while sick as a dog. Other than that, it’s easy to understand why Open the Gates has enjoyed such enduring popularity as one of Manilla Road’s best loved albums, and why it remains, along with predecessor Crystal Logic and follow-up, The Deluge, a recommended first listen for new fans.