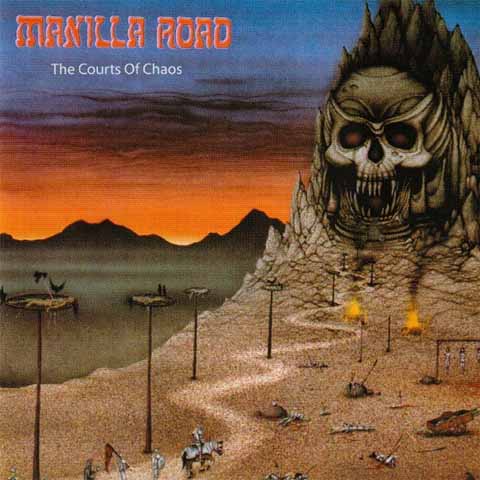 Manilla Road’s final album prior to the disintegration of their classic line-up, 1990s The Courts of Chaos found vocalist, guitarist and guiding force Mark Shelton also playing the role of diplomat between his two estranged bandmates, bassist Scott Parks and drummer Randy Foxe, who were reportedly no longer on speaking terms. Needless to say, such tensions were hardly conducive to a healthy and productive recording environment, and so The Courts of Chaos would, not surprisingly, fall well short of Manilla Road’s best efforts from the mid-’80s. Then again, it was no more flawed than its direct predecessor, the production-challenged Out of the Abyss, with representative tracks like Dig Me No Grave, From the Grave and A Touch of Madness clearly begging for more liveliness and passion in their performances, while frequently recycling old ideas with dispiritingly inferior, at times seemingly atonal results. Overall, though, most of these songs are simply too damn long; with D.O.A. probably qualifying as the biggest offender for hanging onto a repetitive Randy Foxe synthesizer figure for what seems like ages, then finally bursting into thrash-action with what sounds like a drum machine — odd. At least amends are partly made with the similarly synth-addled The Prophecy, which, along with a generally engaging fantasy epic called The Book of Skelos, and the quite memorable title track, deliver rare positive exceptions to the album’s mostly negative rule. More than anything, The Courts of Chaos sounds like a failed, last-gasp attempt on Manilla Road’s part to recover the magic of their early years just as its last wisps were burning out; a mournful occasion to be sure, and the beginning of a long darkness for their fans, which would only be lifted a decade later. Better late than never, though.

Track list
1. Road To Chaos
2. Dig Me No Grave
3. DOA-Bloodrock cover
4. Into The Courts Of Chaos
5. From Beyond
6. A Touch Of Madness
7. Vlad The Impaler
8. The Prophecy
9. The Books Of Skelos:
I) The Book Of Ancients
II) The Book Of Shadows
III) The Book Of Skulls
10. Far Side Of The Sun-live