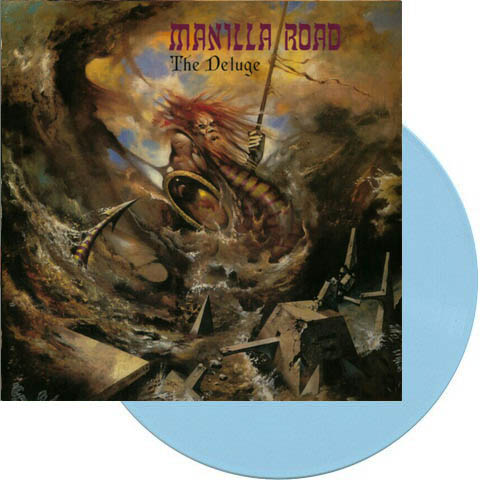 The final instalment in Manilla Road’s sequential trilogy of indispensable albums, 1986’s The Deluge was, in many respects, the perfect combination of its two predecessors: merging the inspired but eccentric and, some might say, old-fashioned compositional style of 1983’s Crystal Logic, with the more predictable, but also more modern, thrash-infused aesthetic and heightened musicianship of 1985’s Open the Gates. Really, it boils down to personal opinion, though, because all three albums constitute the backbone of the Kansas-based indie metal stalwarts’ long and varied career. Opener “Dementia” is one of the most forceful and immediate numbers in Manilla Road’s oeuvre; reacquainting fans (who, let’s face it, needed little reacquainting) with leader Mark Shelton’s distinctive vocal signature, evocative lyrics, and flabbergasting six-string abilities — and reminding them of recently added drummer Randy “Thrasher” Foxe’s critical new role in Manilla Road’s mid-’80s sound. Hyperactive to the point of sounding too busy on ensuing standouts like “Shadows in the Black,” “Friction in Mass,” and “Rest in Pieces,” his flailing omnipresence was nevertheless greatly responsible for making their music more palatable for the children of thrash (although it would also foment rising animosity with quiet man bassist Scott Park, and eventually destroy the group). Foxe also shows off his synthesizer skills on the very ’80s, very dated, interlude, “Morbid Tabernacle,” but that’s not to say that he ever actually threatens to steal the spotlight from Shelton. The end results are slightly mixed on his uncharacteristically direct, dual attacks on religion, “Divine Victim” and “Hammer of the Witches,” but his songwriting inspiration achieves unquestionable all-time peaks on fantasy metal classics like “Isle of the Dead,” the furious “Taken by Storm,” and the three-part, eight-minute masterpiece of a title track, which sees him paying his first (but hardly last) visit to the lost city of Atlantis. Fittingly, when he returned there 15 years later for 2001’s Atlantis Rising, it was with the goal of resurrecting Manilla Road’s career from a ten year sleep, and briefly return it to the state of unrivaled glory not heard since The Deluge and its aforementioned forerunners.