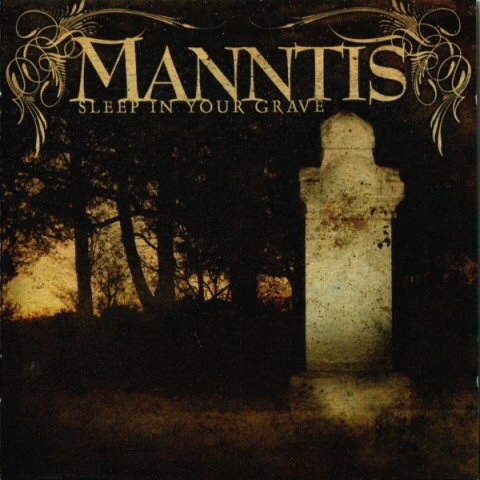 Manntis -Sleep In Your Grave cd

Metalcore band Manntis may owe much of their fame (not to mention their very record deal) to their guitarist’s participation in that Ozzfest reality show — which he didn’t win, by the way. But if their 2005 debut album, Sleep in Your Grave, is any indication, that fortuitous dash of publicity may have only provided the last little nudge toward the attention they were deserving of anyway. Right away, it becomes apparent that Manntis’ single-mindedly intense compositions tend to avoid the sometimes forcedly wide (read: commercial) dynamic range that this genre’s major players (Killswitch Engage, Shadows Fall, etc.) have ridden to success. And when combined with vocalist Jake Sirokman’s almost exclusively grunt-like roar (he never sings melodically until the uniquely acoustic closer, ‘The End’s Where It Begins’; only risks some spoken tones here and there) and the fact that all of the album’s 11 cuts rigidly observe hardcore-dictated two-to-three-minute lengths, it’s clear where the roots of Manntis’ music lie — and no, it ain’t metal. Rather, most of the latter’s complexity and typical light-and-shade is generated by the tightly wound twin guitar work of Adair Corley (the Ozzfest dude) and Jeremy Swanson — whether tightly harmonizing (‘Approach’, ‘Weathered Soul’), chunk-thrash-riffing (‘Reflections of You’, the title track), speed-picking in quasi-black metal fashion (‘My Enemy’), or even buzzing melodically like bumblebees (‘Axe of Redemption’, ‘Shades of Hatred’). Which is to say that listeners used to easy-breezy hooks will have a harder time decoding Sleep in Your Grave’s more nuanced metalcore mix, but the end result — although far from qualifying as an essential experience — is ultimately very satisfying.