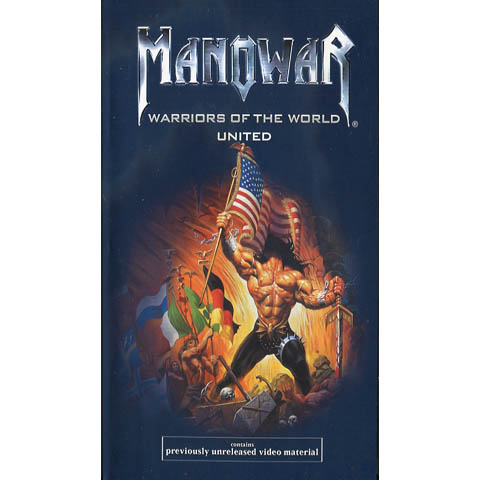 Don’t really know where to begin with this vhs compilation. Depending on how you view Manowar, it’s a rather bemusing or embarrassing reflection on Heavy Metal music as it stands in the year 2002. For one there is little doubt the integrity and loyalty that Manowar show to Heavy Metal but it’s the old clichés that begin to stretch the patience: of course I refer to the bands quest for laying as many women as possible and generally taking the piss out of as many people as they can along the way. Oh and drinking beer in copious quantities. Sure they have had their detractors but this package will only add to the lambasting and lampooning. Manowars music represents all that is good in Metal: The power, the emotion, the energy, the steadfast belief that what they are doing is the right thing to be doing. However Manowar not playing music is something entirely different. Check out the way they are introduced to the German TV-Total Audience. They simply look foolish and completely out of place in a modern TV studio. Bright lights and a near complete absence of Metalheads just leaves you pondering why are they doing this? Joey DeMaio’s completely over the top response to each and every question makes Lars Ulrich look like a UN Ambassador. Guitarist Karl Logan hardly says a word; drummer Scott Columbus just doesn’t want to be there but vocalist Eric Adams comes across as about the only band member who can truly communicate to the camera through the course of the vhs. The TV-Total rendition of the glorious Warriors Of The United is a shambles. The sound is thin and raspy. Only Eric Adam’s magnificent voices manages to save the day. Just. The utter nonsense with some mad German named Olli is so embarrassing and cringing that you’ll watch with fascination as Olli lampoons the very music that Manowar have fought so hard for over the years. But am I missing the point? Or is there a point to this? Any Manowar material is usually greeted by myself with great joy. However after watching this I can only wonder at just what Manowar are thinking. The making of The Warriors Of The World video and the video itself are excellent. Documenting the trials of dealing with the Kings Of Metal. The rest we could do without.