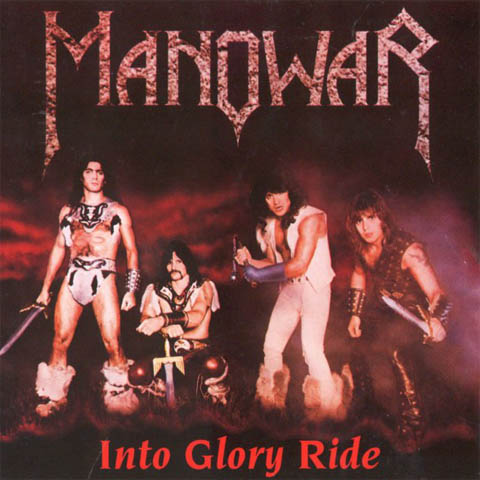 1993 remastered edition with the No Fuckin Bootleg sticker on front

One year after their amazing debut album Battle Hymns, Manowar release Into Glory Ride as the follow-up. Between these two, the musical style has changed greatly. The debut was generally balls-out straightforward heavy fucking metal, fast and catchy, although it did have two excellent epic tracks. On Into Glory Ride, they put alot more focus on the epic approach, and the songs tend to move on at a slow pace, with a rather doomy atmosphere, and I must say they do it really well. The raw yet well-defined production with the high bass also adds very much to the musical direction taken here. But despite the big change in the musical direction, this is unmistakably the same band that recorded Battle Hymns. The bass assault of Joey DeMaio and the amazing ranged vocals of Eric Adams delivering loads of powerful midrange vocals and mindblowing high pitched screams, are both classic trademarks of any Manowar album. And of course, we have the punishing riffs and mental solos of Ross the Boss, who played with Manowar from Battle Hymns to Kings of Metal, and started the band together with Joey DeMaio. And then the band has replaced the former Donnie Hamzik with Scott Columbus, which was undoubtedly a very good choice. Scott Columbus brings shitloads of power into the mix, hammering the drum kit with some of the heaviest drumming ever, and without overuse of the double bass. This four-man lineup provides us with this album, which although sandwiched between two of the band’s strongest albums, kicks a great deal of ass.