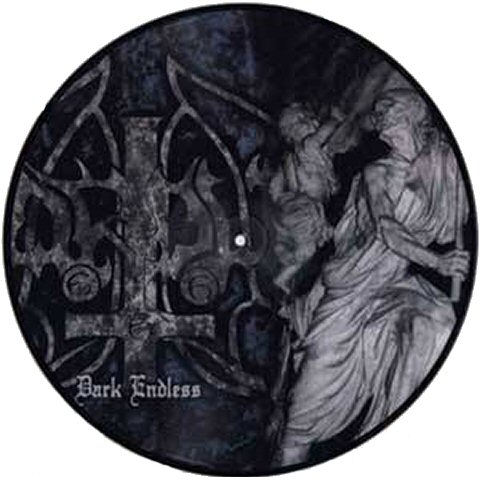 Recorded in 1992, Dark Endless was Marduk’s first official full-length album, although not the very first thing they recorded (the infamously titled Fuck Me Jesus demo of 1991 had already earned them a small cult following in the Scandinavian extreme metal scene). Of course, a lot of things changed in extreme metal between 1992 and today. The death metal/black metal field became more diverse, Scandinavia became the part of the world with the heaviest concentration of death metal bands, and more people realized that black metal and death metal — although closely related and often combined — were two separate things. Dark Endless came at a time when Marduk had only been together two years (the band was formed in 1990) and black metal was quite young — so young, in fact, that some listeners assumed the album was death metal and didn’t pick up on the differences between death metal and black metal. And that is understandable because early death metal and early black metal were both ultra-thrashy, punk-drenched styles that thrived on rawness. Dark Endless doesn’t pretend to be sophisticated or polished; these are incredibly raw, primal, bare-bones performances that underscore, in a big way, black metal’s punk and hardcore roots. But one huge difference between Dark Endless and much of the grindcore-style death metal that was recorded in 1992 is Marduk’s lack of irony. While grindcore bands like Cannibal Corpse and Carcass had a cartoonish, dark-humored outlook, Dark Endless epitomizes the type of unsmiling serious-mindedness that set black metal apart from grindcore in the early ’90s. Compared to some of Marduk’s subsequent recordings, this album is mildly inconsistent. But despite its limitations and imperfections, Dark Endless is an exciting and historic relic from black metal’s early years.

Track listing:
1. The Eye Of Funeral
2. Still Fucking Dead (Heres No Peace)
3. The Sun Turns Black As Night
4. Within The Abyss
5. The Funeral Seemed To Be Endless
6. Departure From The Mortals
7. The Black
8. Dark Endless
9. Holy Inquisition