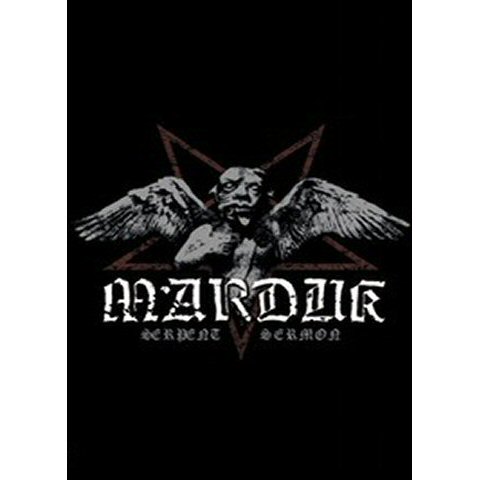 Marduk definitely is one of the most important and legendary black metal bands. With their twelfth studio album Serpent Sermon the Swedish black metal tyrants are finally back. The line-up change that introduced Mortuus gave Marduk a whole new lease on life after World Funeral, which saw them, treading familiar territory, albeit in excellent form. Whereas neither the thicker, nastier sound of classics like Those Of The Unlight and Opus Nocturne, nor the infamous heads down blasting of Panzer Division Marduk really seemed to sum up what the band was capable of, Plague Angel, written prior to Mortuus arrival but bearing his vitriolic vocal stamp, seemed to epitomize everything the band was capable of and stood for. Now after two slightly more adventurous outings in Rom 5:12 and Wormwood, Marduk make a more conscious attempt to sum themselves up, and sum up black metal in general for that matter. The ever-modest press release that accompanied Serpent Sermon stated an intention to perfect a sub-style of black metal with each and every track. Now I’m not always sure what they’re going for here (mostly sounds like Marduk… probably better than sounding like a bunch of other bands anyway) but each song has its own vibe. But musically, a follow up to the catchy, simple, brutal Iron Dawn EP. There’s plenty of hyperblasting, vicious stuff here – more than of late. The title track admittedly bears heavy Watain influences in its primary riffing structure, and a great deal of the Nordic-heroic black metal blare that Marduk helped create in the chorus (refer to Germany’s Negator et al). It’s the most Swedish song you’ll hear all year, basically. But not the most Marduk song. ‘Messianic Pestilence’ could be from Panzer Division if it weren’t for the occasional departures from blasting for some sinister double kicked sections. But ‘Souls for Belial’ is the first song to come along that really has me believing these guys are out to end the world, having left it with one final up-yours. Terrific headlong riffs and exhilarating pace changes chocka, simple as fuck in its composition but undeniable in its memorability. Instant Marduk classic. ‘Hail Mary (Piss-soaked Genuflexion)’, ‘M.A.M.M.O.N.’ and ‘Gospel of the Worm’ sate your appetite for such blasphemous rushes later on, although these don’t quite notch up to ‘Warschau 2: Headhunter Halfmoon’ or ‘The Hangman of Prague’. They’ve set out to conquer all though remember, so the album does feature some slower blackenings, the cracking closer ‘World of Blades’ serving to bring the album more in line with grimy epics like ‘To Redirect Perdition’ and the brilliant ‘Imago Mortis’. ‘Temple of Decay’ is like a sorrow-drenched, doom metal take on something like Carpathian Forest’s ‘The Well Of All Human Tears’, and another standout. ‘Into Second Death’ revisits anthemic death marches like ‘Funeral Dawn’ to break up what is mostly a frantic, jangling, Darkthrone homage. Mortuus’ vocals are as hate-filled, gargled and weird as ever, probably my favourite Marduk vocalist. The way he twists his malevolent voice gives a few songs that might otherwise seem par for the course just the vinegar needed to really hit the mark. The hysterical, charging blasts of songs like the title track and ‘Souls for Belial’ are fantastic in their own right, probably less musically accomplished but more immediately re-playable than the unnerving whine of recent standouts like ‘Limbs of Worship’ or ‘Chorus of Cracking Necks’. The epic bits are more than alright as well, bringing the oppressive doomsday sermon of Marduk full circle.