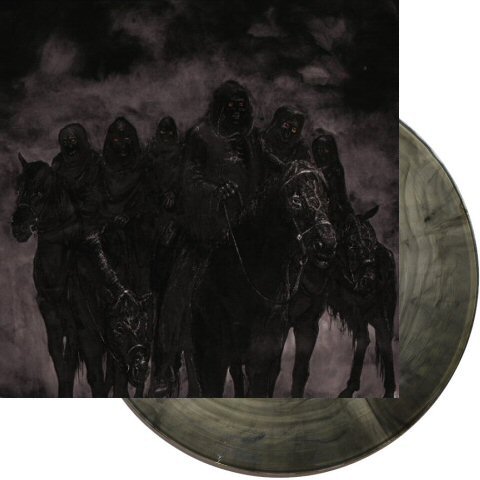 Marduk -Those Of The Unlight lp [smokey]

In the 21st century, it is not uncommon for one of the harsher black metal bands to boast that “no keyboards were used on this album.” That is their way of bragging that they consider themselves black metal purists and are distancing themselves from the more musical and melodic bands that comprise the symphonic black metal school of black metal. But when Marduk recorded Those of the Unlight back in 1993, black metal wasn’t as diverse as it would later become; therefore, the more abrasive and brutish black metallers didn’t feel a need to tell you what set them apart from keyboards-loving black metallers. And the word “brutish” definitely describes Those of the Unlight, which maintains the spirit of rawness that characterized its predecessor, Dark Endless. Granted, Those of the Unlight isn’t as extreme as the amelodic grindcore bands that were raising hell in the late ’80s and early ’90s — the tunes on this 1993 recording, unlike the grindcore material of death metal’s lunatic fringe, have actual song structures — but at the same time, no one will mistake this album for symphonic black metal. It’s too rough and tumble; too jagged, too primal

Track listing:
1. Darkness Breeds Immortality
2. Those Of The Unlight
3. Wolves
4. On Darkened Wings
5. Burn My Coffin
6. A Sculpture Of The Night
7. Echoes From The Past
8. Stone Stands On It’s Silent Vigil