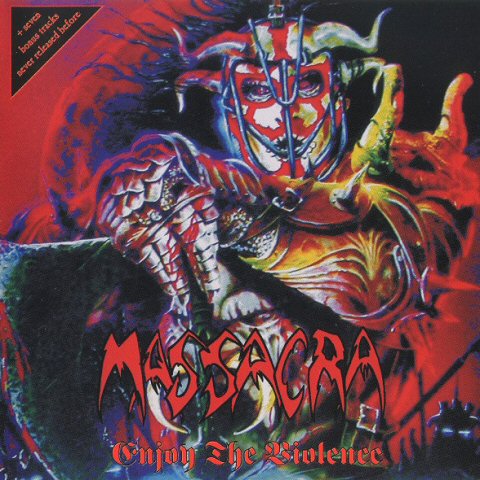 Massacra substantiated the world-beating death/thrash credentials that were hinted at by 1990’s Final Holocaust debut with their aptly named second album, 1991’s Enjoy the Violence, which summarily grabbed that nasty sophomore slump fellow by the throat and beat him to bloody a pulp! Even though it barely deviated from its predecessor’s template — thrashy death metal laden with apocalyptic themes — the album boasted a slightly cleaner production at the expense of only mere ounces of the group’s precious sonic ferocity, all the while bolstering its makers’ reputations as incredible musicians with the remarkable precision necessary to pull off their frantically challenging songs. Just listen as vocalist/bassist Pascal Jürgensen somehow manages to juggle both the band’s reliable bottom end and the inhuman growls hovering over it all; as guitarists Fred Duval and Jean-Marc Tristani fine-tune their positively telepathic rhythmic interplay while maturing immensely as stylists from solo to solo; and as drummer Chris Palengat simply steamrolls the group forward indefatigably at whatever pace is necessary — and it’s evident why Massacra were reaching the peak of their powers on this outing. So much so, that picking out highlights is almost a pointless exercise, but for shits and giggles, let’s go with he ubiquitous title cut, the gloriously profane “Ultimate Anti-Christ,” and the more deliberate yet even more foreboding “Near Death Experience.” And with minor but significant departures like the clean-picked intro to “Revealing Cruelty” and the surprisingly doom-paced “Full of Hatred,” Massacra were hinting at the broader creative horizons that already beckoned to them, slowly but surely. For now, however, the French quartet could content themselves (if content were ever a word to be associated with such a band and style of music) with the knowledge that Enjoy the Violence ranked with the absolute best thrash-infused death metal ever recorded.