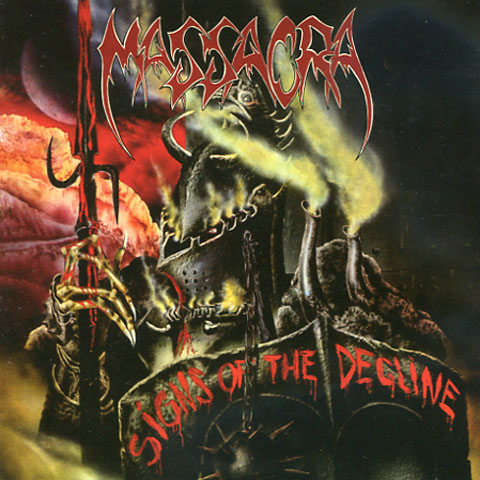 Massacra -Signs Of The Decline cd

If ever an album was doomed by a poorly chosen title it was Massacra’s third effort, Signs of the Decline. Just what the French quartet was thinking is anyone’s guess, but the album did wind up auguring the start of their descent from close to the top of the European death metal heap — albeit gradually, since the outright collapse would only come with album number four, Sick, where they attempted unsuccessfully to reinvent themselves as a groove metal band in Pantera’s image. But on Signs of the Decline, Massacra’s worst sin may have been moving backwards instead of forward; as though the group were suddenly regretting the dynamic experiments that had added new dimension to their previous and perhaps best album, Enjoy the Violence, by unleashing a rather uniformly paced batch of super-thrashers like “Defying Man’s Creation,” “Mortify Their Flesh,” and the title track. Either that, or Massacra were simply running out of ideas within this particular template, because the number of cuts benefiting from fresh ideas, a little more rhythmic variety, or even the odd ear-catching solo — e.g. “Evidence of Abominations” and “Excruciating Commands” — were farther and fewer between this time around. Sure, one could never accuse the band of lacking in energy or aggression, but even their production standards seemed to have receded since their previous outing, thus contributing to Signs of the Decline’s generalized feel of disinterest, and bringing the most successful, death/thrash phase of Massacra’s career on a sour note.