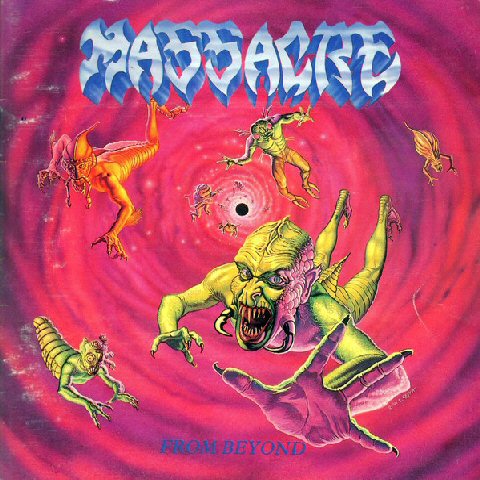 Massacre -From Beyond lp

Brutal and fast death-metal notorious for Kam Lee’s deep, roaring vocals with excellent production. Rick Rozz guitar is one of the thickest meat grinder crunch tones out there, the bass has a full and deep sound, and the drums sound crisp and clear. However by the time this debut album, their masterwork, was finally recorded and released, they were woefully out of date. Already Suffocation had come, and the death metal landscape would never again be the same. What many fail to realise, however, is that these songs are older than the printed date suggests, being penned in the 80’s, whilst death metal was still in its embryonic stage. Massacre, however, went a different direction from the legendary Death – a band in which most of the band had already served. The riffs are less angular, with less of the haunting melody that Death became known for; whilst the music is more thrash than death in many ways, the timbres used by Massacre defined the future sound of the genre – brutal, deep, muffled, and grinding. Massacre preferred to focus on primordial heaviness over frenzied brutality with the result that the riffs and structures stand out, loud and proud. And what riffs! In their purest essence, Massacre basically reverted every single staple tenet of advanced musical theory: precision, harmony, melody, dynamic, sophistication, complexity and subtlety are blown straight out of the window by a wall of unrelenting riffage. This album proves that the deadliest of death-metal always comes from Florida.