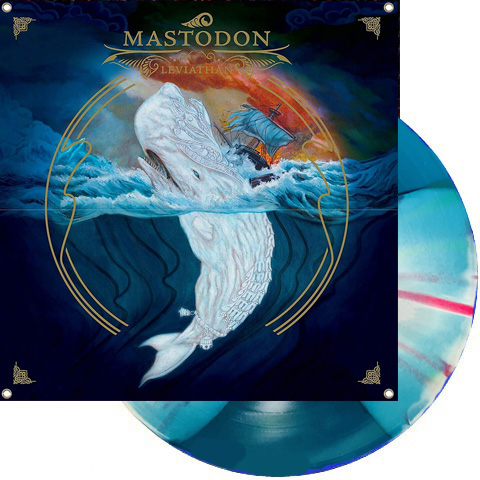 When Mastodon first reared its bucktoothed head in 2001 with the Lifesblood EP, the scriveners of metal took note: here was something promising. With 2002s Remission, the promise was kept; it was a debut that puzzled and excited listeners with an amalgam of styles: hardcore punks intensity and angular chops; death metal’s squealing, complex guitars; a heaviness usually the province of sludge and doom metal; and drumming that risked its integrity and ventured into the territory of wank by courting progressive rock and jazz. (Has anyone other than Magma’s Christian Vander dared to marry percussion this complex to metal this extreme?) Other bands have flirted with this territory, most notably Dillinger Escape Plan, but their attack always had one foot firmly planted in punk’s messy metalcore backyard. Mastodon, however, are leveraging with all hooves staked in the murky underworld swamp of extreme metal. We are now out of Remission and into 2004’s highly anticipated follow-up, Leviathan, which again puzzles and will surely alienate one old fan for every two new admirers it gathers in its net. The naysayers will note that too many concessions were made on Leviathan in order to gain a wider audience, that the production is too polished and the vocals too melodic, and they are right. On Remission there was a claustrophobic paranoia, a suffocating heaviness like an elephant’s heel pressing on someone’s chest; its vocals were the raw hardcore screams of an anarchist drill sergeant. Leviathan digs out of the boot camp stampede and seeks out even heavier environs, going where few bands have gone before, straight down into the ocean. However, the studio polish of producer Matt Bayles that will be agonized by underground purists turns out to be just surface glare. Lurking beneath is an expansiveness more massive than anything found on the shores. The sound on Leviathan seems bottomless and infinite in the best possible way: it’s not a dip in the pool; it’s a headlong cliff dive into deep waters. There are remarkable no-they-didn’t, yes-they-did changes littering Leviathan like chum in shark territory. “Megalodon” moves from angular post-hardcore to chugging boogie thrash with deceptive ease, turning from one to the other with a Southern rawk guitar lick sure to have Duane Allman raise a bony hand in deathly devil-horned approval. It’s not just that the sound is now “oceanic,” either; metal has always had a tendency to rehash the same dark themes and few bands have the wherewithal to attempt to broaden that vision. Leviathan may not be an out and out concept album, but it’s awfully close and thank god they didn’t choose anything as cheesy as a blind kid playing pinball. Instead, Mastodon’s chosen guide is Moby Dick, and a good portion of the lyrical themes on songs like “Blood and Thunder,” “I Am Ahab,” “Aqua Dementia,” and “Seabeast” are based on Herman Melville’s dystopian waters. It’s a good fit with the music, too. Filtered through Melville’s spyglass, the watery tales and creatures of Leviathan are even more paranoid and intense than the more terrestrial Remission. Those who choose to follow Mastodon into the sea will surely agree.