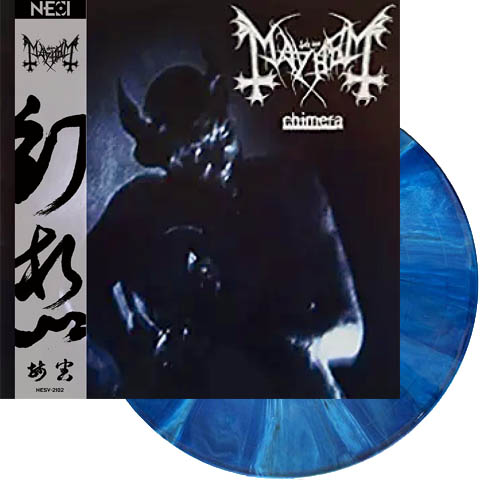 In the aftermath of their most avant-garde release, Mayhem decided to return to their black metal roots with ‘Chimera’. For a large part of the fanbase, this was the right and obvious choice after the strange experimentation of ‘Grand Declaration of War’. However, this album manages to have its own fair share of otherness, leaving mixed feelings after its listening. This one is a quite brutal, intense and technical black metal album, and this is not the brutality of norsecore we’re talking about. First of all, the performance the band gives here is nothing short of amazing and rivals that of many death metal bands. Blasphemer’s guitar skills really shine here, delivering complex and at the same time dark riffs at great speed. The bass is actually audible and manages to get the attention of the listener in songs like ‘Dark Night of the Soul’ and ‘Impious Devious Leper Lord’. Maniac is well, Maniac. Hellhammer is as always jackhammering his kit with non-stop blast beats. The production here is one of the most clear in black metal and delivers us each instrument’s sound perfectly. This, however, is what actually mortally wounds ‘Chimera’. It fails to give the listener the passion and the atmosphere this album was meant to have. Gone is the rawness of ‘Deathcrush’, the darkness of ‘De Mysteriis Dom Sathanas’, the claustrophobia of ‘Wolf’s Lair Abyss’. Overproduced albums don’t go hand to hand with one of the defining elements of black metal: atmosphere. The songwriting here, just like the performance, is top-notch for black metal. Although Blasphemer decided to follow a circular approach in his songs, they have some quite complex parts that give the album a progressive touch that nicely manages to save it from drowning in monotony. At first glance, this is not easily perceivable, but the band has done a great effort in layering many sounds one upon another. Lyrics seem to have been written by Maniac, and they are his usual misanthropic ones, but this time they seem to have matured and moved away from the destroy christianity point of view to deeper and darker thoughts.