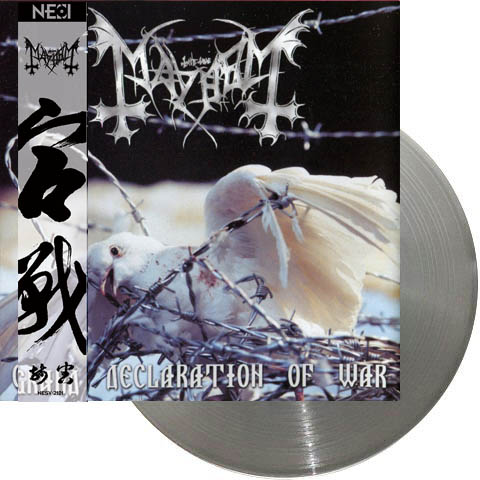 When this album was released, many people reacted strongly about it. How could Mayhem, who have always been so keen about True Black Metal, make something like this? Many of the songs include electronical elements, the sound quality is good, and Maniac is experimenting a lot with his voice. When comparing this to De Mysteriis Dom Sathanas, the difference is huge, and if the fans had expected a new DMDS, I understand why they got really disappointed and upset. In an interview I read, Blasphemer said that this album is so different from the other work they have done because it’s a concept-album, however, it’s still 100% BM. In a way, that’s true. You can see the album as a real groundbreaker, but from an old fans perspective, it’s not, because electronical elements can’t be used in order to make a 100% true BM album. Or can they? Another thing that is different from regular Black Metal is that Maniac speaks a lot within the album. The beginning of View From Nihil (Part 1 Of 2) starts with him saying a speech-type introduction. It’s a bit different, but makes the atmosphere so much better. The song structures and writing methods on this album are incredibly unpredictable and amorphous. Strange, dissonant guitars swoop in and out of the mix, and are often layered to create a certain apocalyptic ambience. Blasphemer and Hellhammer coincide perfectly to create jagged, unorthodox time signatures and rhythms, as on ‘Crystallized Pain in Deconstruction’ or the middle section of ‘In the Lies Where upon You Lay’. It’s safe to say that Mayhem use a very technical approach here, even on the simpler songs; For instance, while the second half of, ‘View From Nihil, Part I’ may seem to be a straight barrage of blast beats, there are a ton of nuances in the guitar rhythms that make it a challenging listen. I truly believe that Blasphemer composed his most challenging material on this album, both listening-wise and playing-wise. Overall, this album isn’t solid, but shouldn’t be. If it were to be solid, it wouldn’t be experimental, because in my opinion, solid means to have boundaries to an album, but I feel like this album almost has no boundaries.

Track list:
1. Grand Declaration Of War
2. In The Lies Where Upon You Lay
3. A Time To Die
4. View From Nihil
5. A Bloodsword And A Colder Sun
6. Crystallized Pain In Deconstruction
7. Completion In Science And Agony
8. To Daimonion