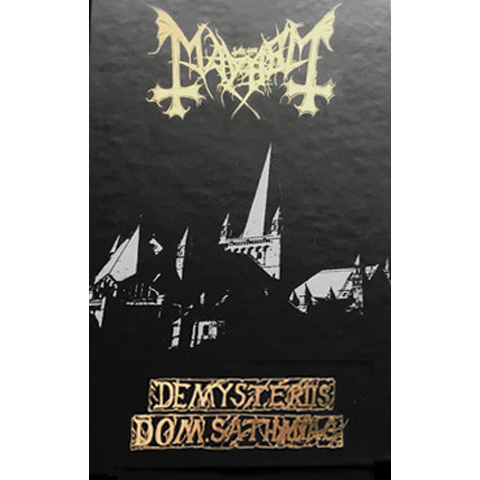 De Mysteriis Dom Sathanas album can best be described as cold black metal with hints of death metal (Those, mainly being on vocals in certain parts). After Dead’s suicide in 1991, Hungarian black metal vocalist Attila Csihar from Tormentor was invited to perform the vocals for this album. Despite his Hungarian accent that is sometimes noticeable, Attila is a great vocalist. Unlike most black metal vocalists, he incorporates much in his vocals. He growls, drones, grunts, screams, and even chants. His vocals are very interesting and are not of one single pitch or style like most black metal vocalists. The actual music is excellent. The album includes a lot of classics like the slow and heavy Freezing Moon and the fast and vicious Pagan Fears amongst many others. Overall, this is easily Mayhem’s greatest work and it’s just too unfortunate that such a line up that was present on here will never get the chance to work together again. When Attila returned to Mayhem he personally made a copy of the rough mix of the album that features Euronymous original bass sound, as the level of bass was reduced for the final mix. This rough mix version of the album can be found on the Life Eternal cassette added to this box. The third box is a live recording made at the Black Christmas festival in Norrkoping, Sweden on the 18th of December 2015 when the band performed the complete De Mysteriis Dom Sathanas album live. This box is a great tribute to the album that beomce the single most important release and template for the rising Norwegian Black Metal scene. No black metal collection is complete without it.