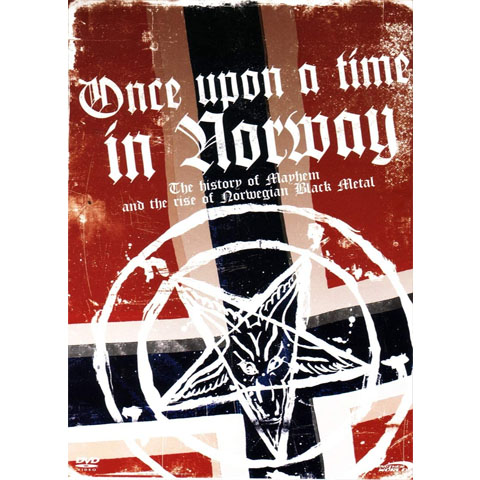 Mayhem -Once Upon A Time In Norway dvd

Once Upon a Time in Norway is about Norwegian Black Metal. It`s about satanist undergrounds, secret brotherhoods, friendship, betrayal, arson, violent death and everything else that makes Norwegian Black Metal the most infamous popcultural phenomena in the world. This is a theme that interests a variety of audiences, not only the typical Black Metal fan or general headbanger, but also an Arthaus audience, as the theme is pretty exotic for a non-Nordic audience. Audiences into subcultures and anthropology will also find interest in this, as well as the general cultfilm audience. Once Upon a Time in Norway will surely attract those who approve films like The Filth and the Fury (documentary about the Sex Pistols), American Hardcore (documentary about the American Hardcore scene of the early 80s), Hated: GG Allin & the Murder Junkies (documentary about the shock punkrocker GG Allin), Metal: A Headbanger´s Journey (documentary about general heavy metal), etc. Audiences that approve these less music oriented, but yet cult films, will also find the film interesting: American Movie, Heavy Metal Parking Lot, Legalize Murder, Killing of America, Theremin: an Electric Odyssey, Mondo Cane etc, etc. Audiences into horror, gore and splatter will also find this film interesting. And everybody is speaking Norwegian, that adds an extra touch of reality.