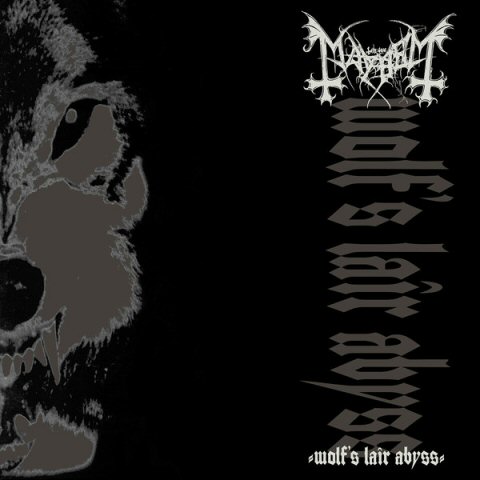 Wolf’s Lair Abyss symbolizes two major steps for Mayhem: First, the return of vocalist Maniac, who contributed to 1987’s Deathcrush EP before being replaced by the soon-to-be-dead Dead (who was followed by session vocalist Attila Csihar for black metal benchmark De Mysteriis Dom Sathanas). Secondly, it’s notable within the group’s dodgy, blood-specked catalog as its first effort since the death of founding member and guitarist Euronymous, here replaced by the aptly named Blasphemer. Not surprisingly, longtime fans had reason to be skeptical with regards to Mayhem’s reformation, Wolf’s Lair Abyss featuring only two founding members in drummer Hellhammer and bassist Necrobutcher — but this five-tracker remains true to the subcutaneous sensibilities the band helped define in the late 1980s and early 1990s, while simultaneously kicking the songwriting and production up a notch. Thankfully, Maniac adds credibility and his share of inspired moments to Wolf’s Lair Abyss by drenching his performance in the “necro” aesthetic of Norse black metal lore, his retching toeing the line between truly frightening and humorous (like any good death-gargler does, actually), often sounding like his extremities are being fed to a wood chipper. “I Am Thy Labyrinth” and “Symbols of Bloodswords” boast complex, lengthy arrangements armed with icy melodies, the guitars hissing and rattling like dentist drills over Hellhammer’s ever-impressive blasting percussion battery. More importantly, such epics show a relatively sophisticated and creative step forward for Mayhem, pointing a scaly digit toward the left-field, artsy (and often strange) approach the band would take with full-length studio follow-up Grand Declaration of War.

Track list:
1. The Vortex Void Of Inhumanity
2. I Am The Labyrinth
3. Fall Of The Seraphs
4. Ancient Skin
5. Symbols Of The Bloodsword
6. Ancient Skin
7. Necrolust