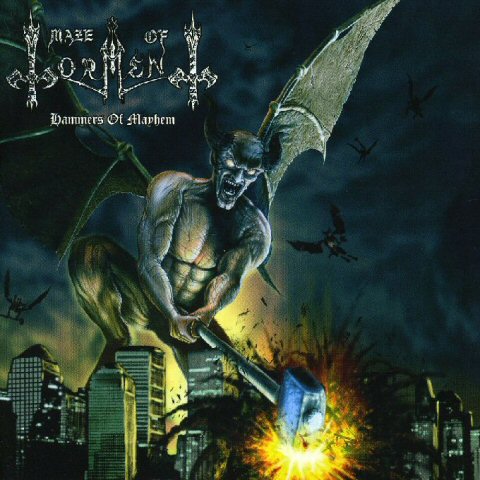 Swedens Maze Of Torment has been around since 1992, and are know as a true underground band with serious bad luck when it comes to labels. But they’ve always manage to rise on nine, and even if they had much problems with labels this is their fifth full-length album, and maybe their luck is about to change? ‘Hammers Of Mayhem’ was recorded and mixed by Tommy Tagtgren in Studio Abyss during two weeks in August 2003. What these guys are giving you on this album is 37-minutes of raw, fast and grim thrash death metal, 10 songs that’s fast from the beginning to the end, you’ll not get a chance to rest your head until the album is over. And as a little bonus, you’ll get a great cover of Venom’s ‘In League with Satan’ in the end. ‘Hammers of Mayhem’ is a good album, even if you’ll easily hear that this band has been underground almost too long. The material is good, and very even, and even if it’s missing these really groundbreaking tops, I still rank it pretty high against bands of the same kind. Production is great too, and that this would only take two weeks to finish is quite amazing. Maze Of Torment are driven by anger and suffering, the relentless pacing of ‘Beyond The Infernal Gates’ and ‘Into The Bloodswarm’ stop at nothing to bring old schooled guitar based death thrash. Guitars have loads of thrash fuelled riffs lined up as well as ancient solo licks. Drums are fast using blast beats in between, otherwise they’re pretty standard relying more on powerful hits instead of fancy arrangements. Maze of Torment has been doing this so good for to long I really hope Black Lodge are the label that can lift this band up to another level