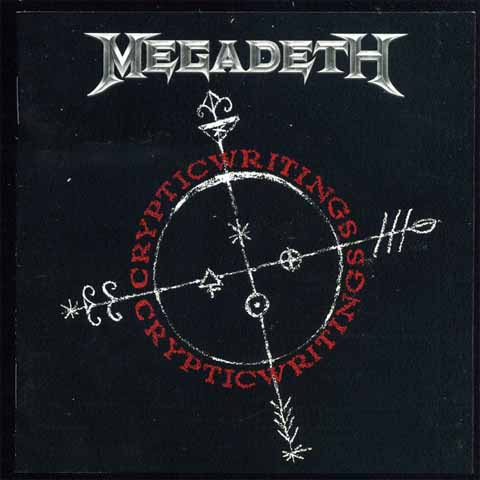 A lot has been said about ‘Cryptic Writings’, both positive and negative, but a fact is, that its a really solid album but you cant label it thrash metal. On ‘Cryptic Writings’, Megadeth, and singer/guitarist Dave Mustaine in particular, tried to get back a large share of Metal in the music again, which makes ‘Cryptic Writings’ an album that has that special balance again. The album has a really, really strong opener. ‘Trust’ is a very good song, probably even one of the best songs that Dave Mustaine and Marty Friedman have ever written together. The lyrics are quite sensitive and the music builds up very nicely. The Disintegrators and FFF are both pretty fast offerings, and She-Wolf waters down the intro to Metallica’s thrash Disposable Heroes and puts down a very catchy heavy metal song. ‘Use The Man’, is one of Megadeth’s best ever songs. The sampling of the Searchers’ 60s hit Needles And Pins works well giving the subject of Dave’s heroin-warning tune. The acoustic verses and Dave Mustaine’s typical dangerous low voice create a perfect atmosphere and a nice step towards the great chorus of the song. A nice surprise is the heavy guitar riff underneath Marty Friedman’s great solo, which is based on the same key as the verses, just played more metal. This is another album that gets a bad rap in the metal scene because for the most part is so different from anything else the band has done in the past. It’s hard to deny that Cryptic Writings is definitely different from Megadeth’s previous albums, it’s still packed full of some nice songs.