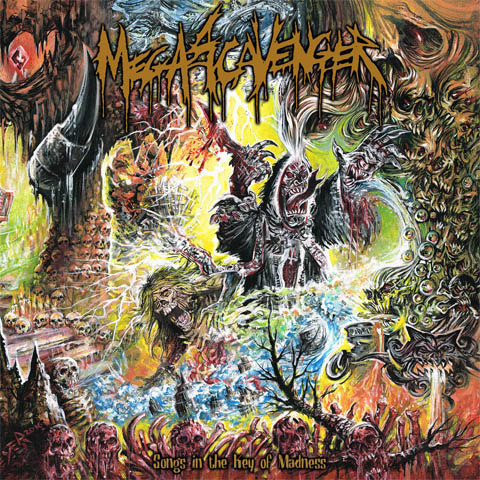 2012 was another busy year in the life of Rogga Johansson with albums from The Grotesquery, Revolting, Putrevore and Humanity Delete and still he had time to form a new band called Megascavenger. Then jump forward 8 years and its already time for Megascavengers fifth album, Songs In The Key Of Madness. This is gore drenched death metal in the vein of Grave, Illdisposed, Exhumed, Impetigo and the likes. Guest vocalist and guest guitarists comes from bands such as Machetazo, Cropsy Maniac, Wombbath, Fondlecorpse and Paganizer. Just listen to the savage opener They Went Mad as it sets the mood for the whole album. This is an intense album but with an enormous, warm, enveloping sonic cocoon of heaviness. It sounds enormous. Melodic yet suitably grim for Johannson’s standard tongue-in-rotting-cheek lyrical content, and full of pummeling driving rhythms.

Track list:
1. They Went Mad
2. The Beckoning Of The Rats
3. Laboratory Serenades
4. First We Slay (Then We Gorge)
5. Five Severed Fingers
6. Nothing But The Feet Remains
7. Human Sinkhole
8. A Terrible Tale Of Reeking Remains