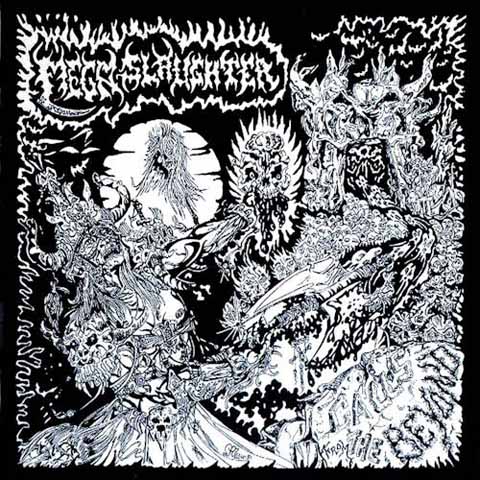 Megaslaughter -Calls From The Beyond cd

Megaslaughter, formed in Gothenburg in 1987, was initially known as Dinloyd. Their first demo under the new name ‘Death Remains’ surfaced in 1989 and garnered the band a deal with French label Thrash Records who released the hard-to-find album ‘Calls From Beyond’. That nowadays is a very sought after gem from the early Swedish death metal underground. The music found on this album is dark, mostly mid-paced death metal with the occasional thrash influences. But what makes this album different from other Swedish releases of the time is that these guys don’t always sound typically Swedish (i.e. trying to copy Entombed and Carnage). Yes, the guitars are still very down-tuned and there are parts of certain songs that will make you wonder if Matti Karki somehow had his hands involved in this; but for every typical Swedish riff on this album there are 3 or more riffs that have a very American death metal sound to them. You can hear lots of influences from Autopsy, Obituary and Baphomet in some of the slower, chunky riffs that are accompanied by a rolling double bass beat. The vocals are somewhere between a deep growl and high shriek and produced with a good amount of reverb. ‘Calls From The Beyond’ is a solid piece of Swedish death metal that was sadly drowned in a sea of other similar releases at the time. The band split in 1992, with vocalist Emil Lilic resurfacing in 1997 fronting Murder Corporation and drummer Patrik Raffling surfaced in the early years of Hammerfall. For those of you who worship the early Swedish death metal bands this is definitely an essential purchase. This 2007 cd release includes the fist two demos as bonus material