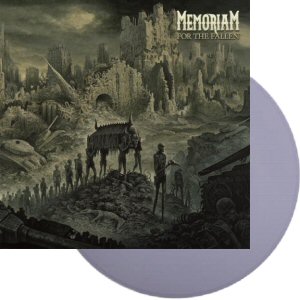 Memoriam -For The Fallen lp [lilac]

Surrounded by death…When Bolt Thrower drummer Martin “Kiddie” Kearns passed in his sleep on September 2015, the members of Britain’s longest standing death metal band were absolutely bereft. Three weeks after, bassist Frank Healy, of UK death metal legends Benediction, lost his father. All that sorrow left a massive hole in the hearts and minds of the Midlanders and the key members of both bands needed an out. A way to cope with the emotional hardship. So, vocalist Karl Willetts and Healy teamed up with ex-Bolt Thrower drummer Andy Whale and riff-master Scott Fairfax to form Memoriam. “I think the main thing that separates us [from Benediction and Bolt Thrower] is the guitar style and sound,” Healy says. “And the actual song structures. The three of us go back to the early days of the [death metal] genre, but Scott is from the later part of the death metal scene, and his playing is a bit more technical. This, in turn, has created what has become our sound because three of us are pretty happily set in our ways in the old death metal style we like to play. Mixing that in on Scott’s songs makes for a very heavy but interesting sound.” The debut album, “For The Fallen” was recorded over two weeks at Hellfire Studios with producer Ajeet Gill. IT has a massive yet underground sound – somewhere between yet beyond “Transcend The Rubicon” and “The IVth CrusadeW. It’s the kind of full-length that’s a rarity today. From ripping opener in ‘War Rages On’ to midway killer ‘Flatline’ to the epic closer ‘Last Words’, the album has a classic yet contemporary sound. While fans and critics can appreciate the end results, getting it right took four weeks of mixing and re-mixing. So if youre looking for an old school death metal the way it has to be done! No big surprises, but for sure, no bad surprises. Then check out “For The Fallen” as its a real bomb of an album. Sure you will hear some trademarks from Bolt Thrower and Benediction but theres also so much more. This outfit dares to go beyond boundaries or expectations, even in more sensitive and thoughtful manners. Memoriam is a true celebration of life through death metal.