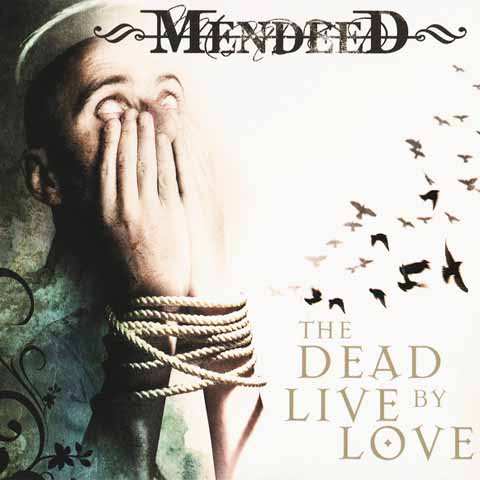 Scotland’s Mendeed represent a new generation of power pop-death-metalcore bands who blend hooky melodies and catchy clean-sung choruses with astonishingly jagged, metallic riffing, viciously croaked shouts, and almost uniformly frantic speeds. What’s more, their second album, The Dead Live by Love, boasts an overall mix so crisp and clean that, were it not for the last three qualities, some extremists might be tempted to dismiss it as something other than heavy metal — maybe super-charged emo or something. But of course such extremists would feel the same way about wildly popular contemporary acts like Dragonforce and Children of Bodom, both of whom similarly excel at cramming these apposite sonic components into surprisingly accessible (if hyperactive) packages; yet nevertheless seduce their audiences with high-energy live shows and unquestionably virtuoso instrumental prowess. In any case, Mendeed’s newest thrill rides, “Burning Fear,” “Fuel the Fire” and “Reload ‘N’ Kill,” thrash away with such wild abandon, one can’t help but wonder just how the band might be able to replicate them on-stage (and whether a bassist is even required, given the trebly nature of these songs). Yes, several tracks, including the title song and “Gravedigger,” occasionally pause for breath while exploring slower tempos, and others (“Blood Brothers,” “Thirteen,” etc.) find time for some serious death metal action; but adrenaline junkies are always guaranteed a very short wait until the quintet reloads their collective juggernaut, and resume careening through the stratosphere. In short, Mendeed’s unquenchable stores of energy is likely to impose an age-limit on their prospective audience, but otherwise appeals to all fans of easily approachable heavy metal.