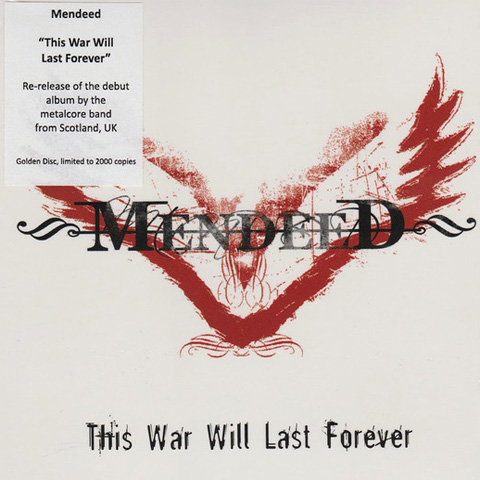 This War Will Last Forever was Mendeed’s first foray into album-length territory, but the precocious Scots were ready — having honed their skills throughout several demos and EPs in the year’s leading up to this, their first release for new label Nuclear Blast. Thankfully, they’d also seen fit to shed their early flirtations with nu-metal, just as the loved-or-loathed style was falling out of commercial favor, and so This War Will Last Forever signals their newfound focus on more recent, early-2000s trends such as melodic hardcore and resurging power metal. Not surprisingly, these two, historically unrelated styles frequently clash throughout this album, with alternately impressive (“Stand as One and Fight for Glory,” “Withered and Torn,” “The Reaper Waits”) and chaotic results (“Poisoned Hearts,” “The Black Death”). Meanwhile other hybrid blasts like “Chapel Perilous,” “The Mourning Aftermath” and “Resurrecting Hope” somehow pull off an even more curious blend of the harshest metalcore, power and black metal elements, thanks to their raging blastbeats and crusty vocals. OK, so it’s obvious that these boys are all over the place (another song, “The Blasphemy We Bleed” has an intro riff that sounds like Armored Saint), but one can’t help but cut them some slack and chalk This War Will Last Forever’s somewhat forced unevenness to a youthful desire to please, not contrived fashion-hopping.

Track listing:
1. What We Have Become-intro
2. Beneath A Burning Sky
3. Stand As One And Fight For Glory
4. Remains Of The Day
5. Chapel Perilous
6. The Mourning Aftermath
7. Poisoned Hearts
8. Withered And Torn
9. Resurrecting Hope
10. For Blasphemy We Bleed
11. The Reaper Waits
12. The Black Death