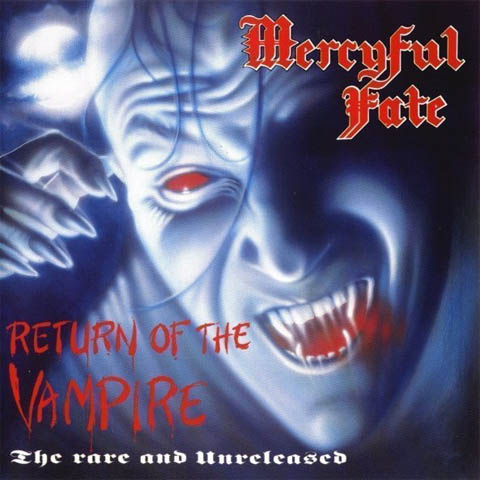 Possibly because they got wind that seminal Danish heavy metal band Mercyful Fate was set to re-form after a ten-year hiatus and sign with a rival label, Roadrunner Records moved to clear its vaults of any remaining material (and therefore prevent the boys from easy recycling) with 1992’s Return of the Vampire collection. The results: nine rarities evenly spread between early demos and never-heard tracks were of course embraced with devotional rapture by the band’s loyal contingent of aging fans. And with good reason, as, except for a few very poor-sounding demo relics like “Death Kiss” and “You Asked for It” (early versions of the classic “A Dangerous Meeting” and B-side “Black Masses,” respectively), there’s enough black magic here from the core creative duo of vocalist King Diamond and guitarist Hank Sherman to slake the thirst of the most demanding collector. Even taking into account the band’s at times subpar performances, hearing primitive versions of Melissa’s “Curse of the Pharaohs” and The Beginning’s “A Corpse Without Soul” is already exciting enough; but experiencing the truly surprising and bizarre title track, or figuring out which portions of “On a Night of Full Moon” were later reworked into Don’t Break the Oath’s “Desecration of Souls” is twice as fun. And it doesn’t get any better than eight-minute opener “Burning the Cross” — a fully formed epic that could have easily made its way onto either Melissa or Don’t Break the Oath; it’s that good. Finally, true fanatics are offered two peculiar tracks, “Leave My Soul Alone” and “M.D.A.,” which were actually recorded by lead guitar player Michael Denner’s pre-Fate outfit with the help of Diamond and Sherman. In short, this is quite the tasty morsel for serious Mercyful Fate fans, but somewhat pointless for casual listeners.