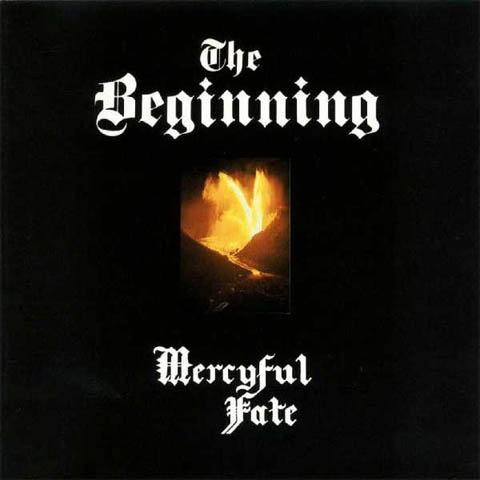 The Beginning was released as an excuse to re-release the band’s debut EP Nuns Have No Fun outside the band’s country, Denmark, to a wider audience. This four songs are the highlight of the release. King and Co. always apologize for the ‘atrocious’ sound quality and production, but they shouldn’t – the sound is gritty and raw, and helps emphasize the aggressive riffing, but it’s clear enough to pick everything out. And the songs – talk about gems! Anyone familiar with the songs on the albums knows the band’s penchant for constant mood-feel changes, tempo shifts, etc., and this EP has all of that in spades – “Doomed by the Living Dead”, “Devil Eyes”, and “A Corpse Without Soul” are whirlwinds of metallic fury with aggressive riffing, shredding solos, a bouncy, almost funky rhythm section, and of course King’s wonderfully blasphemous lyrics and over the top vocal delivery. “Nuns Have No Fun” is the icing on the cake, though – the band is in as fine a form as always, but the lyrics cross into the tackily humorous category. If the disc stopped there it would still be worth its price. Next are “Curse of the Pharaohs,” “Evil”, and “Satan’s Fall” from a live BBC broadcast in 1982. This was before the release of “Melissa”, so some of the arrangements are slightly altered from the final versions (most notably “Evil”, which loses one complete solo section). The performances are tight and flawless, and the live energy and raw sound makes these versions better than what ended up on Melissa. Speaking of Melissa, track 8 is “Black Masses”, a B-side of the “Black Funeral” single, which was cut at the same time as Melissa but left off of the album. Personally I think this was a good move – the mood of the song isn’t quite as doomily oppressive as the rest of the songs on Melissa, and the limp sound of that album is even worse on this track – the version on “Return Of The Vampire” (when it was still called “You Asked for It”) is much better. Finally, on the reissue is the song “Black Funeral” taken from the “Metallic Storm” compilation. This is not a version that appears on any other compilations, and again since it was recorded early and quickly it’s much more raw than the version that ended up on Melissa. Overall this album is a VERY worthy purchase for any Mercyful Fate fan. Not just a ‘where did they start’ album, I feel that it is an integral part of their discography, as it shows all of the elements of their style honed to perfection and performed with raw, youthful abandon.