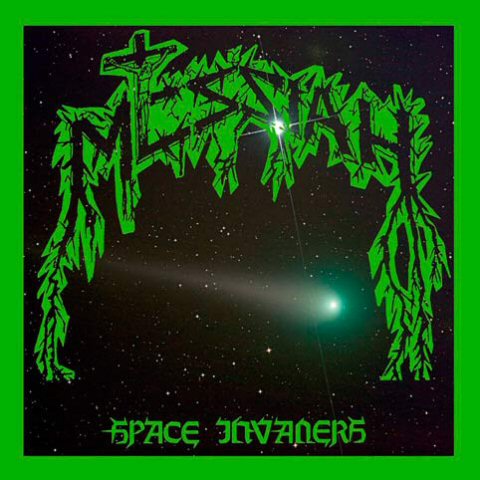 As it is in life, there are always two sides – the positive experiences and the negative ones. With the release of “Space Invaders” I would like to tell something about the history of past times, which could explain the status recognized today and on the other hand led to misunderstood musical excesses of Messiah at that time. When we started to play “noise”, it was pure fun without any expectations. Most of this is known from our debut album “Hymn To Abramelin” and I don’t have to go into more detail here. But there is a phase of Messiah that is very formative, which is why the band broke up in the original formation in 1987 and then found a new line-up again in 1990. The rehearsal recordings by Space Invaders are a document of the times on the one hand, and the instrumental tracks “Maleus Maleficarum” and “The Urologue”, which have not yet been released, on the other hand, show what would have happened to Messiah if they had not dissolved. Unfortunately, there were no more recordings of Tschösi’s vocals/screams at that time. Nevertheless, the songs give an idea of what it would have sounded like after “Extreme Cold Weather”. Uninfluenced by the rather sobering reviews of the “renowned metal press” at that time, we simply continued to play as we pleased. Rather, it was a problem to deal with personal circumstances among each other. I address here the negative sides of life, which in connection with Messiah with different musical and personal interests of the original members led to problematic situations, which resulted in the dissolution of the band. Messiah never oriented themselves musically to the popular bands of that time, rather we experimented with our own ideas. This led to a mix based on our different musical tastes. However, this became so extreme that further cooperation was no longer possible. Perhaps this circumstance explains why Messiah made very independent music and still separates the wheat from the chaff after more than 30 years. The recordings of Space Invaders reflect this in my opinion very authentically. Some recordings of our first songs which will later be included on “Hymn To Abramelin” and will now be released on “Space Invaders” are still without bass. Tschösi later decided to take over the bass along with the vocals, without any previous knowledge. The rehearsals by Space Invaders were a rediscovery for me and especially the title Messiah comes in its very first brutal version, as it would not be playable for me today. The title Space Invaders is also presented here as it was initially composed. I wish today that this version of the song of “Space Invaders” would be released on the “Hymn To Abramelin” album.
This recording is not a musical or technical high performance, but only a contemporary document of our work and experimentation. The tracks on the live page of “Extreme Cold Weather” like “Last Inferno” or “Golden Dawn” are released here on Space Invaders as rehearsals. A very broad reference as it could have come as a studio production. Why the album title “Space Invaders”? Already in the early stages we experimented with analog synthesizer sounds and atmospheric acoustic guitars. In the lyrics we not only dealt with religious topics but also with science fiction. Tschösi got himself an analog synthesizer and I was also very inspired by it – which led to the fact that I later composed the intros and outros for Psychomorphia in the new Messiah formation. With “Extreme Cold Weather” we applied this for the first time. These recordings document the experiments with the analog synthesizer effects. The artwork for “Space Invaders” represents a time bridge. To our spacey Synthi experiments at that time and the lyrics to “Space Invaders”, together with my photos from my own home observatory where I have been practicing astrophotography for years and am interested in astrophysics. This album is dedicated to all those who are open to the ancient new and do not remain in rigid structures. Thrashing Space Invaders Madness
Brögi / 2018