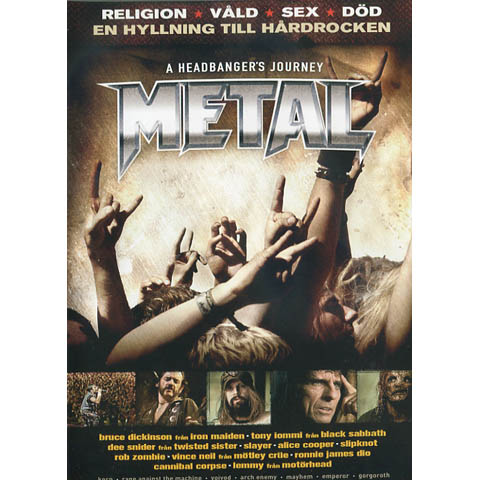 An anthropological study of Heavy Metal? Is this for real? Believe it man, it’s true, and it’s pretty darn good at that. Metal – A Headbanger’s Journey is a labor of love for director/ producer Sam Dunn; anthropologist, academia, metalhead. Like a good anthropologist Dunn has often wondered about cultures, societies, and the key elements that makes them thrive. Being a life-long headbanger, Sam Dunn decided to turn his academic skills onto himself to study and attempt to explain the often misunderstood culture that shaped his existence and millions of others around the world. Structured like a traditional anthropological journal, Metal – A Headbanger’s Journey is broken into sections such as “Origins,” “Roots,” “Environments,” “Culture,” “Sexuality,” “Religion,” and “Death.” Many topics are addressed such as identifying the first heavy metal band, what in the music defines the heavy metal sound, why heavy metal unites fans from around the world, why the music has been a target for so many watchdog groups, and who really popularized the heavy metal horn salute. For non-metalheads, the structured approach keeps the documentary on track and prevents it from getting cartoonish and too fan-based and self congratulatory. Metalheads that don’t care about film’s structure, will thoroughly enjoy the interviews of metal’s elite (including originators Tony Iommi, Alice Cooper, Dio, and Bruce Dickinson to modern day heroes Tom Morello, Rob Zombie and Lamb of God) the music, fan commentaries and the concert footage. So raise your horns up high, turn it up loud and check out the best Heavy Metal film ever made.