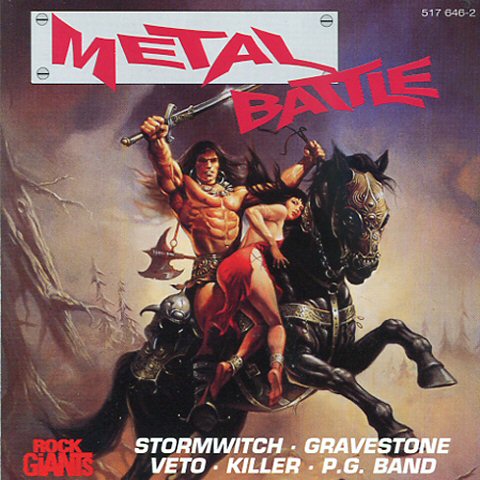 Veto
Legendary among those who love and praise German Heavy Metal. The band were founded in the early 80s but had major problems to find a permanent drummer. However in 1984 they managed to score a record deal with GAMA records. Even a record deal couldn’t help to attract the right drummer so label boss Peter Garattoni stand in as a session drummer during the recording of their debut album released in 1986. Just like most other Gama bands Gravestone, Noisehunter, Tyrant and Stormwitch they weren’t that well received by the media but more loved by the metal fans. The problem with finding a decent drummer would follow the band during their whole career so the band became more of a studio project than a live band. In 1988 the band released their second and last album ‘Carthago’ and Garattoni laid down the drums even this time. The second album was just as strong as the first one but still no media back up and soon afterwards the vocalist Harry Liebhauser had to leave and that was the final nail in the Veto coffin. The band tried with a new singer but they soon disbanded. Veto had the quality of uniting melody with class and metallic feeling, going from fast songs to melodic stuff and all between.

Sinner
Led by vocalist and bassist Mat Sinner (born Matthias Lasch), Sinner is a German metal band reminiscent of countrymen like the Scorpions and Accept. The band was formed in Stuttgart, Germany in 1980, and released their first album, Wild ‘n’ Evil, in 1982. Their sophomore effort, 1983’s Fast Decision, was their first album to be released in the United States. Throughout the ’90s and well into the 21st century, Mat Sinner juggled Sinner along with his other projects (including Primal Fear, Level 10, Rock Meets Classic, Voodoo Circle, and his own Mat Sinner Band), with Sinner as the sole constant member of the group.

Gravestone
Gravestone was one of the many great bands that were on Gama records that never really got anywhere. This band released three good albums and the 85 album ‘Back To Attack’ is a true hammer stroke, still. Simple, pure Heavy Metal. Intelligently done and without any big weaknesses. Guitarist Mathias ‘Don’ Dieth later briefly showed up with Sinner and U.D.O.

Tox
Tox from Göppingen in Germany released their debut album “Prince Of Darkness” in 1985 on Mausoleum records. The album title and cover artwork exude a certain aura of heaviness however Tox wasnt the heaviest band or a band into the occult or satanic imagery. What we find here is melodic heavy metal with mixes both classic 70s hard rock with NWOBHM and also some prog elements. The two tracks on this compilation aren’t the strongest from Tox debut album though but still gives a rough idea of what the band sounded like

High Tension
High Tension was a German hardrock band that was formed in Villingen-Schwenningen in 1979 by guitarist/songwriter and singer Armin Weisshaar. The band released 3 albums 1985 ‘Warrior’, 1986 ‘Under Tension’, 1987 ‘Masters Of Madness’ before they quit in 1989 when guitarist Thomas Diestein was injured in a car crash. The band received good reviews during the years and toured in Europe with bands like Girlschool, Victory and Nazareth. The reunited and released a fourth album in 1992 simply called ‘Four’.

P.G. Band
One of Gama Musikverlags GmbH founder Peter Garattoni’s many projects. Peter Garattoni is besides a music publisher even a well known drummer who have played with Krautrock, prog rock acts such as Eulenspygel, Nexus, Zero as well as hard rock and heavy metal acts such as Rebel, Veto, Tox, Maniac not to mention other bands such as Floating Opera, Harry Ab , Luxster, Maxwell Blues Band and Passenger. P.G. Band never released anything more than these instrumental tracks that shows up on some of these Gama Musikverlags compilation albums

Tokyo Blade
By 1989 and the release of its fifth long-playing album, No Remorse, Tokyo Blade was essentially the Andy Boulton show. After all, the guitarist was the last remaining founding member still standing, having surrounded himself with three new band mates — vocalist Michael Pozz, bassist Martin Machwitz, and a drummer named simply Astor — since the release of 1987’s ill-fated ‘Aint Misbehavin’ album, which had once again failed to make Tokyo Blade into a commercially viable glam metal band. So it was a matter of great relief actually, when No Remorse, in direct contradiction to its title, took a little pity on Tokyo Blade’s long suffering fans, and set off in a different musical direction — even if only barely. Indeed, although the bulk of its material still comprised sleek hard rock infused with synthesizers, often bordering on AOR, No Remorse wasn’t as intentionally dumped down as its immediate predecessors, only sinking to such lows as on the track available on this album, the stripper theme ‘5-Inch Catwalk’.

Killer (Switzerland)
Killer from Switzerland managed to release 4 studio albums during the 80s that all had their moments however none of them really have that killer tune. The strongest part of the band were singer Mark Broman that had been replaced by Mark Lay for the bands 1986 album Young Blood. Being from Switzerland its obvious that they band has picked up one or two influences from Krokus. Even though Killer felt like quite an average act its still enjoyable to listen to them. It has those powerful melodious songs and fine vocals

Stranger
Strangers debut album, The Bell (1985), is probably the closest thing to Helloweens Wall Of Jericho out there, an essential release in the ancient German speed metal chapter. It then took the band a whopping five years to finally release a new album, and what happened? For starters the entire line-up has changed besides founding guitarist Rikki Wolfgang Rieger (later in Chroming Rose), and this is probably why there’s an entirely new sound and direction here. Gone were the furiously fast rhythm’s, pounding beats, soaring vocals and choruses, ripping solo’s that continue on endlessly. In comes some keyboards, synths, a drastic decrease in speed, silly whistles, terrible themes, ballads left and right, and the disappearance of blood thirsty riffs. This second album was not impressive at all. Comparing Pretty Angels to The Bell is practically like comparing Helloween’s Walls Of Jericho to Chameleon, only I’d take Chameleon over Pretty Angels anyday.

Stormwitch
Stormwitch’s popularity had grown with albums like ‘Walpurgis Night’, ‘Tales Of Terror’, ‘Stronger Than Heaven’ and ‘The Beauty And The Beast’. The band became more melodic after their first two albums and their 1989 album ‘Eye Of The Storm’ saw some melodic and soft traditional heavy metal. ‘King In The Ring’ has the traditional metal approach, with some interesting riffs.