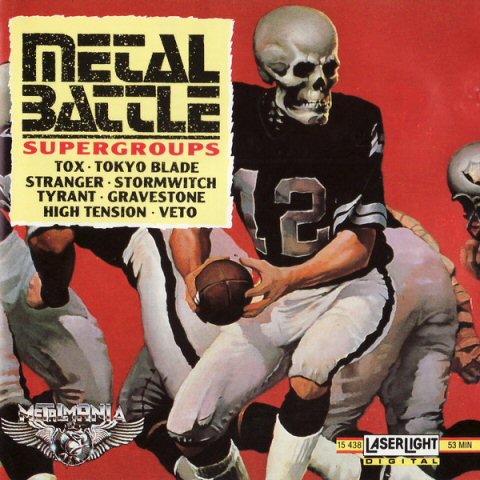 Tyrant
One of several bands over the years named Tyrant, this version was a German band of the mid-eighties hailing from the Ulm area, employing a standard Judas Priest/Accept style that was quite prevalent in Europe at the time like bands such as Warrant, Gravestone, Running Wild, Grave Digger and many others. The initial Tyrant release, 1984’s ‘Mean Machine’, released by Camel Records and recorded in Spygel Studios in Kircheim in July through August of 1984 it was engineered by Batze Kramer, featured Kerrmit, the guitar pairing of Carl Tomaschko and Holgar Thiele, bassist Andre Papack and drummer Micky Budde. ‘Mean Machine’ is highly recommend to any true metal fan. There are plenty of German influences; I think they listened to lots of Roth-era Scorps and, of course, Accept. Obvious also is the Priest, Saxon, Maiden influence. They can be pigeon-holed into a Power/somewhat-melodic/kinda speedy metal description. Their singer sounds rough like Udo Dirkschneider or Chris Boltendahl, ‘Kerrmit’ also sings with a distinct sense of humour. Kinda like Martin Walkyier but without the social commentary. There are lots of sexual innuendo and references to beer drinking and hell raising with a distinct European overtone. If you are a fan of late 70s/early 80s metal you can do a lot worse than listen to Tyrant. It’s pretty standard stuff, but it does not disappoint, and any fan of German Metal at all get this; as these guys have influenced newer bands like Helloween, Blind Guardian and Primal Fear just as much as the aforementioned `big guys’

Gravestone
Gravestone was one of the many great bands that were on Gama records that never really got anywhere. This band released three good albums and the 85 album ‘Back To Attack’ is a true hammer stroke, still. Simple, pure Heavy Metal. Intelligently done and without any big weaknesses. Guitarist Mathias ‘Don’ Dieth later briefly showed up with Sinner and U.D.O.

Veto
Legendary among those who love and praise German Heavy Metal. The band were founded in the early 80s but had major problems to find a permanent drummer. However in 1984 they managed to score a record deal with GAMA records. Even a record deal couldn’t help to attract the right drummer so label boss Peter Garattoni stand in as a session drummer during the recording of their debut album released in 1986. Just like most other Gama bands Gravestone, Noisehunter, Tyrant and Stormwitch they weren’t that well received by the media but more loved by the metal fans. The problem with finding a decent drummer would follow the band during their whole career so the band became more of a studio project than a live band. In 1988 the band released their second and last album ‘Carthago’ and Garattoni laid down the drums even this time. The second album was just as strong as the first one but still no media back up and soon afterwards the vocalist Harry Liebhauser had to leave and that was the final nail in the Veto coffin. The band tried with a new singer but they soon disbanded. Veto had the quality of uniting melody with class and metallic feeling, going from fast songs to melodic stuff and all between.

High Tension
High Tension was a German hardrock band that was formed in Villingen-Schwenningen in 1979 by guitarist/songwriter and singer Armin Weisshaar. The band released 3 albums 1985 ‘Warrior’, 1986 ‘Under Tension’, 1987 ‘Masters Of Madness’ before they quit in 1989 when guitarist Thomas Diestein was injured in a car crash. The band received good reviews during the years and toured in Europe with bands like Girlschool, Victory and Nazareth. The reunited and released a fourth album in 1992 simply called ‘Four’.

Tokyo Blade
80s heavy metallists Tokyo Blade went through numerous line-up changes during their career, but their only constant throughout it all was founding member Andy Boulton (guitar). After the ‘Blackhearts And Jades Spades’ tour Andy Boulton put together a new line up of the band featuring Pete Zito on vocals, Alex Lee on drums, Cherokee bassplayer Andy Catlin, who was shortly after replaced by Chris Stover. They released the commercial ‘Ain’t Misbehavin’ as ‘Andy Boulton’s Tokyo Blade’, and did a tour, and at one point found themselves on a festival billing with Black Sabbath. This line up only lasted the one album.

Stormwitch
Do you wanna take a trip back to the past for a moment, when Heavy Metal meant unity, the bands were absolutely true and, anyway, there was a special mood in the entire Metal scene? It was the early 80s, and while the NWOBHM movement was kicking the worlds ass, in Germany things were a little bit different. Apart from the already familiar names of Scorpions and Accept, many bands with a special teutonic sound were coming out, bands like Avenger (pre-Rage), Helloween, Running Wild, Gravestone, Veto, High Tension, Sinner, Steeler… and Stormwitch. Formed as ‘Lemon Sylvan’ in 1979 before renaming the band Stormwitch. Their popularity grow with albums like ‘Walpurgis Night’, ‘Tales Of Terror’, ‘Stronger Than Heaven’ and the album. ‘The Beauty And The Beast’ features some awesome heavy metal very well-written and consistent throughout the whole album.

Tox
Tox from Göppingen in Germany released their debut album “Prince Of Darkness” in 1985 on Mausoleum records. The album title and cover artwork exude a certain aura of heaviness however Tox wasnt the heaviest band or a band into the occult or satanic imagery. What we find here is melodic heavy metal with mixes both classic 70s hard rock with NWOBHM and also some prog elements. The two tracks on this compilation aren’t the strongest from Tox debut album though but still gives a rough idea of what the band sounded like

Stranger
Strangers debut album, The Bell (1985), is probably the closest thing to Helloweens Wall Of Jericho out there, an essential release in the ancient German speed metal chapter. The Bell features Gerd Salewski and founding guitarist Rikki Wolfgang Rieger (both would later go on to Chroming Rose). The title track from this debut album are available on this compilation and if you like 80 Traditional Metal, you’ll will devour this one.