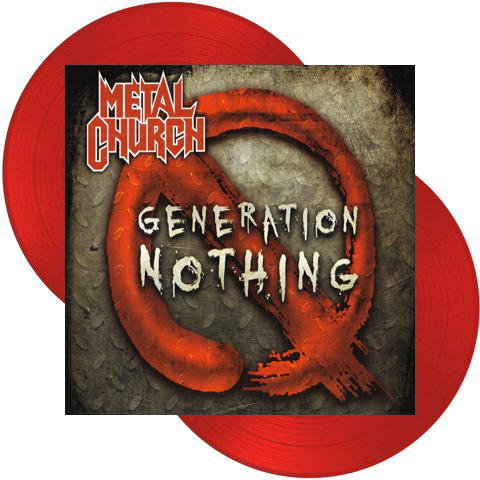 Metal Church Generation Nothing marks the bands 10th full length studio release and boasts the return to the classic metal sound says founding member Kurdt Vanderhoof, It has elements of both the first album and the The Dark, but still embraces the new sound of the band without chasing the past. Generation Nothing combines the best elements of the band’s early roots with modern day lyrical content and a revived hunger that delivers an electric assault of anthemic and epic metal songs. I like to think that this is the kind of album David Wayne would have preferred to make back in 99, instead of Masterpeace – it’s full of chunky guitar riffs and blistering solos by Kurt Vanderhoof and Rick Van Zandt; innovative, powerful, and at times complex drumming by Jeff Plate, who also locks it down tight with bassist Steve Unger; and let’s not forget vocalist Ronny Munroe, who really steps it up – those folks who have felt for years that it’s just not a true Metal Church album without David Wayne’s unique vocal stylings (I’ve been guilty of this myself) will be happily surprised – Mr. Munroe sings with a conviction and passion that fits perfectly with the intensity of the songs, and his upper register wails and shrieks are right out of the Wayne handbook, which puts him in elite company. He has really found his niche on this record, and has never sounded better. There is a distinct and implicit energy and attitude that seemed to be lacking on their previous few efforts. The tracks are well-structured, solid, and diverse – one moment they’re crunching along in a mid-tempo stomp, the next they’re off to the races in an old school thrash flurry. Really, there’s not a weak number in the bunch, and from beginning to end you hear the quality musicianship in the arrangements that Metal Church has always been known for. Stylistically, this album could be considered a natural progression from their debut album and The Dark – it definitely sounds like a classic 80’s metal record in many ways, yet it doesn’t come across as dated in the least. The band has successfully returned to their roots while at the same time remaining contemporary and modern, which is a neat trick if you can pull it off. And many bands can’t. I am thrilled that they are back and making their best music in 25 years. In my opinion they easily belong right up there with the Big Four, and I hope they finally begin to receive the accolades they so richly deserve.