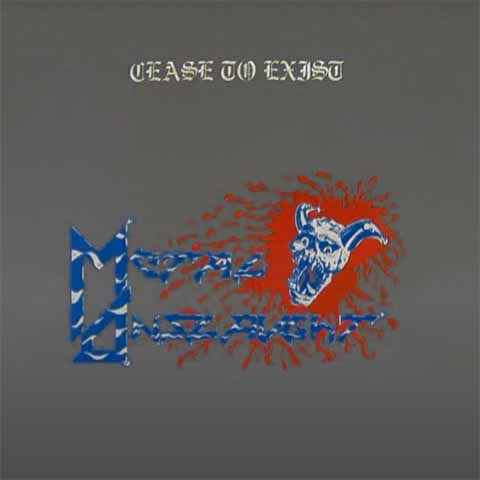 American thrash metal act Metal Onslaught managed to get their track Primal Scream on the Speed Metal Hell Vol.3 album in 1987. Primal Scream is probably their most well known song its a mid-tempo, solo-charged, and colorfully lingual cantankerous grinder – one spiteful motion, one underhanded delivery, one angry personality, Martii Payne spitting out obscenities with a skinless throat – an odd ditty compared to the bands on the sampler going for broke speed-wise around them, and shows no signs of joining the crossover brigade. Four tracks from their 1986 demo and one track from their 1987 demo populate this nine-songer. Disappointingly, none of them fall along the unblemished metallic principle of Primal Scream. Instead, Welcome To My Hell and Victim Of The Axe are hurled to the demons of standard crossover, boppin’ around with happy-riffed tomfoolery most to-the-core thrashers find little good in. Meanwhile, Run For Your Life is more tetchy and chaotic, bursting at the seams with a noisy, one dimensionl energy that won’t be missed. Then there’s Buttfuck, the last previously unsigned track – c’mon, if you can’t see the sweat-warmed flippancy on the horizon, written in juvenile moshpit blood…. Martii Payne’s super-screech isn’t a new formula to the band’s sound, but it’s taken up a painful notch from those on the demo to a hemisphere somewhere between Mille’s blinding Pleasure To Kill affliction and Dani’s holocaustic slices on Cradle Of Filth’s debut, or to chop it down a little more, a sweet Tito Matos/Wehrmacht breed of throatsear that’s somewhere between brazen and annoying. If Cease To Exist would have been released 18 months earlier it would’ve been the most extreme thing on the market. But when it was released it went unnoticed merely because it doesn’t add anything to the already burgeoning thrash spectrum. So dont expect to much because what you have here is four teens being incredibly pissed at their government, rednecks, and a myriad of other things. After this the band rechristening themselves Carnage and releasing a demo before splitting up at some point in the 90s under the name of Lost Soul.