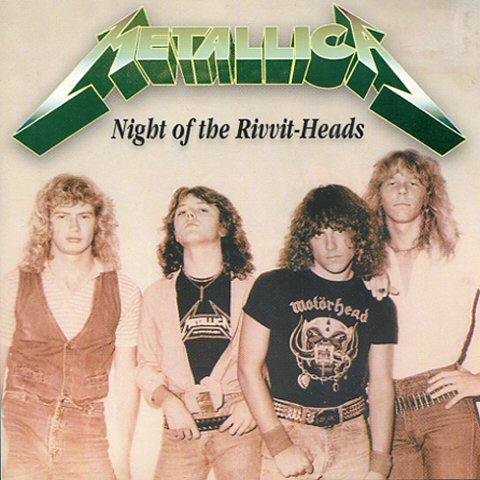 Night Of The Rivvit-Heads is taken from the soundboard during the classic Metal Mondays shows at the Old Waldorf in San Francisco on the 18th of October 1982. The bands this night were Overdrive, Lääz Rockit and Metallica. Only the Metallica recording are featured on this album. In the autumn of 1982 the whole Bay Area and Los Angeles scene was on fire. San Francisco had so many bands (both Metal and Glam) as did LA. Y&T ruled up and down the state. I do believe that almost every band from 1977 up until today has opened for Y&T. Van Halen, Motley Crue, Ratt, Laaz Rockit, Vicious Rumors and I think even Metallica opened for them. There was a ton of stuff going on. Metallica were stoked by the chance to do gigs outside of L.A. and when they travelled to San Francisco they had this “F*ck ’em if they cant take a joke” attitude. The bands very first show at The Stone was cool, but not too many people showed up. The next show at The Old Waldorf 18th of October was jam-packed and the crowd was all Metallica’s. Metallica was Lars’s band at first. James and Ron joined, followed by Mustaine. Dave was the In your face member of the group. Dave did most of the talking between songs as well as wrote a ton of riffs and songs. Ron was the normal member. Great guy! James was shy off stage but after a few beers was the budding lead singer that we all know and love. This line up was good, most of the early demos came from this line-up. Cliff Burton was the missing piece though, with Cliff in the group, Metallica became the most dangerous band in the world. Metallica had the riffs of the New Wave of British Heavy Metal (N.W.O.B.H.M.) with an American lead singer. This combo was the secret to their success. Where either US bands had a good singer but the UK bands had the great riffs. Metallica had both. Ya’ just knew that Metallica was going somewhere. Besides the Old Waldorf gig we also get to hear the second demo the band recorded in April 1982 as well as tour rehearsals in San Francisco in July of 1983. Listen to the secret track at the end where Lars is humming a guitar riff for James to play. Cool stuff indeed.