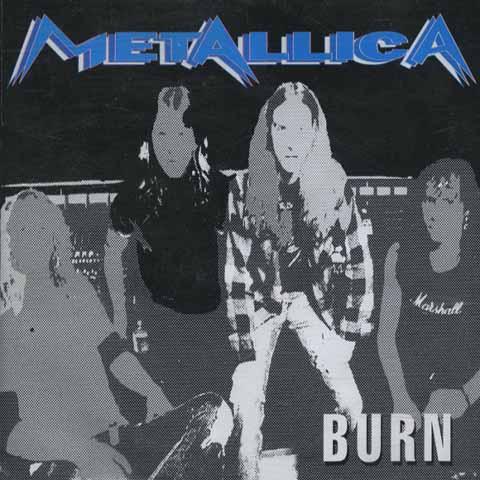 A very rare double cd that has become so hard to find nowadays.

Back in 1989 a German label released a double vinyl set called Burrn and a year later it was released on cd by an Italian label with the more correct spelling of Burn. This album is recorded during the first part of the Damaged Justice Tour at the Forest National in Brussels, Belgium on the 29th of October 1988. The Damaged Justice Tour 88-89 started on the 11th of September of 1988 and the European leg ended on the 5th of November 1988. This album is fun for any fan of the band because its one of the most complete shows from the tour that made it onto a cd. However there are still plenty of flaws. The show isnt complete as there are parts that have been faded out like last part of Harvester is cut and it fades back in right before Master, so Jasons bass solo is missing. The ending of Seek is faded out. Same with the ending of Fade to black, it fades in during Kirks solo right before Little Wing. We dont miss a lot of action but its still annoying. Probably something they had to do to fit the show on 2 cds. There are more flaws to this disc as the sound is terrible at the beginning. However after Blackened youre already used to it and its an audience recording but theres no talkers near the taper which presents the crowd in a very good way. They are very enthusiastic and sing along. The recording lacks bass just like many of the Justice shows does. The cover absolutely deserves the vote as the worst track listening ever. Most of these recordings have spelling mistakes but this attempt is really bad: Blachened, Farwmame the bells, Eye at the belouer, Master at puppies and Melpless to name a few. It also says live in 1989 when its recorded in 1988 (lets just say its part of the collecting charm to find pieces like this). Is it just bad no definitely not. The band put on a great show and they seems to be in a great mood changing lyrics like: scanning the scene in bruxelles-sprouts tonight or like in Last Caress we’ve got nothing to play, it’s back to the USA. It doesn’t matter much to me as long as we’re home. Also a long teaser of Prowler (originally written by Iron Maiden), is played with lyrics. This night they also played Damage Inc which sometimes happened during the European part of the 1988 tour. Later on it could appear as an encore some nights but mostly it was deleted from the set list. The track One were played in the middle of the set at the beginning of the tour. When the single and video became a success then the track was moved further down into the setlist