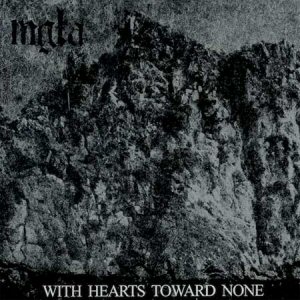 Mgla -With Hearts Toward None lp

Its been almost four years since the Polish black metal duo Mgla released its full length debut Groza. Groza is one of those albums that seems simple on the first listen, but reveals more layers with time. Two or more complimenting melodies constantly weave in and out of one another, while expressive drumming adds highlights throughout. The result is songs that that are quite involved in spite of the limited number of elements. Mglas sophomore release, With Hearts Toward None, reemploys that template but condenses the compositions and upgrades the quality of the riffs. With Hearts Toward None is littered with memorable melodies. Usually the first guitar will play a bright, shivering lead while the second guitar and bass will provide a harsh, crunchy foundation. Sometimes the bass is let loose to contribute some freeform noodling. While the guitar work stays fairly snugly within the conventions of black metal, its hard to pinpoint Mglas primary influences. For the most part, Mgla create a unique sound without trying to redefine or transcend the genre. The highly melodic and layered compositions do recall Arckanum, though this might be more coincidence than direct influence. The drums are highly dynamic and add a lot character to the recording. While there are often steady streams of blast beating, there are plenty of imaginative fills and even a few stretches where the drums become the star. For example, during the opening passage of With Hearts Toward None VII, a steady hook is looped while the drums slowly morph from a loose and vague series of fills toward a focused, fast-paced pattern. In contrast to the debut, Mgla have tightened up the compositions. The songs have more direction and purpose. They spend less time wondering and more time going for the jugular, resulting in some truly standout moments. With Hearts Toward None III sprints from start to finish, with the dark rhythm section standing in brilliant contrast to the beautiful, shimmering lead guitars who seem to become ever more forward and ecstatic and the song unfolds. The contrast between light and dark sounds is prevalent throughout the album. With Hearts Toward None V has a cathartic bridge and almost joyous chorus but the verse is one of the darker passages on the album. With Hearts Toward None is not a massive step forward from Groza, but it does subtly improve on its predecessor. The increased focus and concision of With Hearts Toward None means that the bands message is expressed with greater force and consequently leaves a sharper impression. Mgla are definitely a band finding their stride and fans of melodic black metal should not let this recording pass them by.