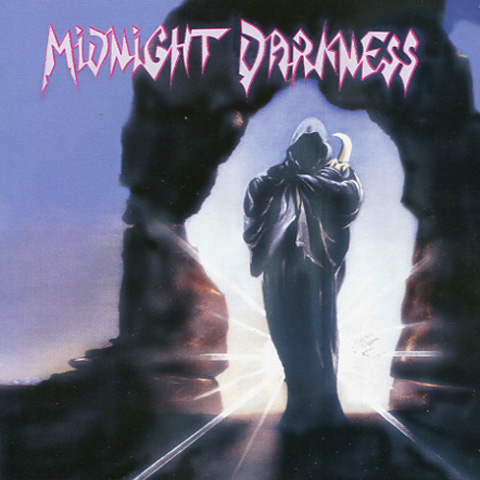 It might be important to qualify here that we’re not just talking about any old darkness, but Midnight darkness, which is an entirely different sort of darkness than the regular darkness you can usually pick up on sale at your normal mom and pop shop. In the case of Midnight Darkness, it is only available imported from Germany and to those few lost souls that brave the highways and plains of futures past, where metal sirens screamed off through the night and the stars seemed to glitter with the dreams of a million heshers, caught staring at the sky in between their worldly thoughts of cars, women, guitars, dragons, beer and with luck, a little blow. To sum up this lost German band, I can offer only that it’s somewhere between the Scorpions and Accept, with the vocals reminiscent of a Klaus Meine at their lower range, screaming up into ridiculous heights that might have been best left alone by Jörg Reuter, since they do seem to break up in that register. Otherwise, the record has that good old ‘climbing the walls’ feel to it which one could only ask of most mid-80s metal that was not blazing a path of ambition or obscurity, but helping cement the status quo. Midnight Darkness chug a little harder than the next band, the tones of the album are thick and welcome, the drums hammering along like a garbage truck out of Hell, and one certainly feels the prototypical spine tingling force of the power metal genre running an undercurrent through their underpants. No, ‘Holding the Night’ has no other purpose but to kick your ass firmly with an iron boot, and it does so with a savage grin across its ugly face. A good old pumping bass-line is joined with down pitched, corny narration about the world of ‘1985’ and the joy ride we’re about to be taken on, lending credence that we might be in for something akin to Helloween. Alas, that’s not quite the case when the guitars erupt and it’s pretty much pure Judas Priest/Accept worship with Reuter’s shrill indoctrinations that thankfully cede to a respectable level. The chorus might not be superb, but it carries the momentum of the verse well and wets the space between the legs in anticipation for whatever could be next on the midnight agenda, which it turns out is the even harder driving “Line Fire”. Once again this channels Accept, and in fact it feels like a missing track that the Germans might have recorded with Klaus Meine on guest vocals with an occasional Peavy Wagner (Rage) nasal shriek. That said, a pretty fun song. “Holding the Night” is your basic, low speed heavy rocker with a little bit of ballast to the axe chugging, and “We Like to Rock” seems as if it were bound for some arena in an 18 wheeler, but then there was some accident which occurred that drove it off the road, to sit in a ditch. There are a few more speed/power metal tracks here like “Mindless” and “L.A. Prisoner”, the latter being the best on the entire album, with sailing guitar lines and dirty bluster that slap it straight into your memory, as basic as the patterns might seem. “Ready to Stay” is your typical “Cat Scratch Fever” gone metal track, the chords in the verse sound familiar though they are smothered in deliciously indulgent little leads, and of course “Forever” is a Scorpions style arena rock piece, very slow and emotionally involved but just not as powerful as the band had hoped. Midnight Darkness had their limitations, and if the truth be told, they often attempted to surpass them on this album. Fortunately, this album is such a perfect emblem of its time, so welcoming any longing for nostalgic virtue that those of you seeking the riches of decades gone will probably chew right into it. The lonely, resonating leads and huge chords truly give the impression of the sun being down, the street lights twinkling and the danger and adventure of the unknown. The 2008 re-issue of the album contains the bonus tracks from the band’s “Running from Future/Free Man” single (1984), and these sound pretty dirty and adequate, the latter feeling very much like any random Judas Priest mid-pacer from the late 70s, perhaps a little Montrose in there; the latter once again combing over Priest territory. Though this was their sole shot at the big time in this incarnation, apparently the band has survived in the form of ‘Past M.D.’, playing a more modern take on the traditional metal tropes.