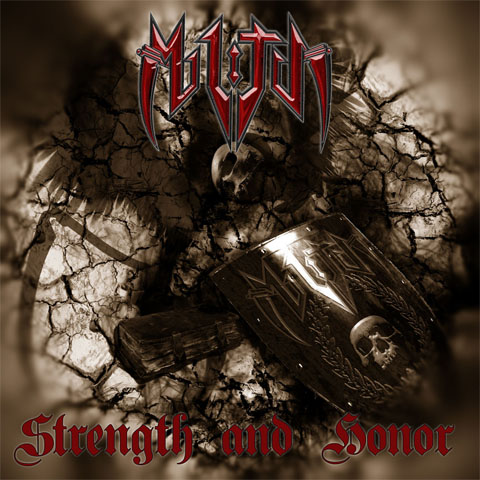 Every band has its own story, success through failure or the other around. The US Power / Thrash Metal band of Militia is one of those 80s reminiscent that got to entice others with a small EP release only years after their breakup. In Militias case it was with their 1984s EP that thrilled many hearts in the European Metal scene in the early 90s after being out of sync since 1986 when they disbanded. I call it tough luck but I think that when looking back and right into the present, maybe that breakup was needed after all. After turning some screws in the present Metal scene, Militia finally released their debut full length album Strength And Honor on their own. Certainly they have something to prove and they sure did it quite impressively after experiencing it, a US 80s Power / Thrash Metal in the vein of the classic Judas Priest, Metal Church, Seven Witches, Helstar and early Metallica. Militia didn’t seem to forget the origins that made them what they are today. Following the heavier patterns of Bay Area Thrash that contributed to fine riffing that summoned a few classic like examples and the intense drumming that also displayed great talent and sturdiness, Militia implemented NWOBHM melodies and fine lead guitar outbursts. Most of the material is like a amalgamation between aggression, sheer punching straightforwardness and classic melodic Metal showcasing. As for the vocals, Militia were able to savour their banshee high pitched Rob Halford and James Rivera influenced lead singer to secure the front end of the coming mayhem. Injustice reminded me of several of 80s American Metal bands, mainly the old Speed / Thrash ones that dealt with social decay. Aside from the usual intense riffing, there is a display of great melodies and a top notch solo spectrum. However the crushing blow of We Need A New Enemy turned out to be a pure Power / Thrash classic, it reminded me of the older Metal Church and Helstar releases of the mid 80s. This is a heavy with song filled with toughness and anger with a clear message revealed throughout the chorus. Above the typical songs of the compilation of genres I liked The Black Marauders, Unveil The Faith and Furious that surged with speed and great riffages this making this release even better after another listen. For those who have been tuning to this band this album must be an incredible event, especially with a first album out.