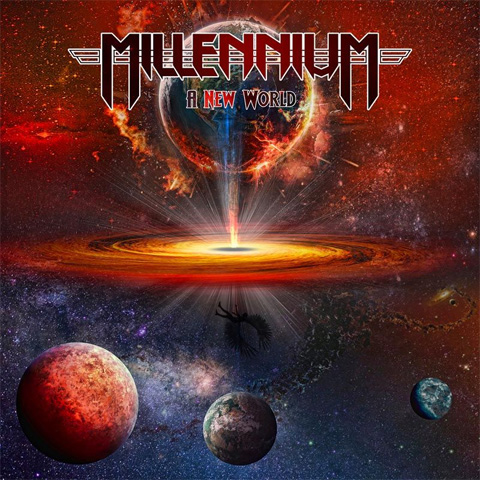 NWoBHM band Millenium formed in Billingham in County Durham in 1982. They were soon snapped up by Terry Gavaghan who ran the local label Guardian Records and Tapes (based in Pity Me, County Durham). After contributing the three songs Steal Your Heart, Rock Was Meant For Me and Magic Mirror to the Pure Overkill compilation in 1983, Millenium issued their self-titled debut album a year later (also released via Guardian Records). After parting ways with label owner Terry Gavaghan they eventually split up around 1988. Singer Marky Duffy went on joined UK thrashers Toranaga. In 2016, Millenium were asked to appear at Brofest in Newcastle upon Tyne. This resulted in a full-blown re-union and a new studio album, 2017’s Awakening. A New World is Millenium’s third studio album in 35 years. We try to keep some of our NWOBHM roots, explains singer Mark Duffy, but we also try a bit of variation with songs like Obsolete and Assassin that have a more straight ahead heavy metal feel to them. Duffy continues: It’s great that we now have the opportunity to release our albums and the fan base is growing. I would say that A New World has a theme running through it in some of the songs. A lot of the songs have an apocalyptic story to them as it’s doesn’t look good for the human race with constant war and a population that’s growing. Something will implode at some point. The album covers these issues.