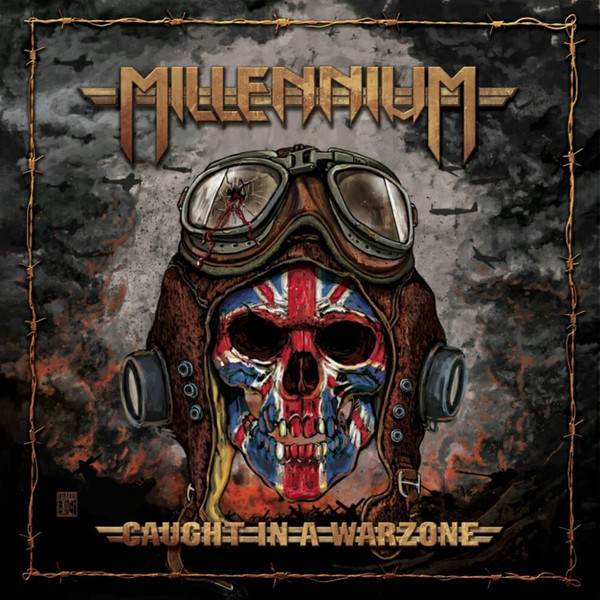 Millennium -Caught In A Warzone lp

Having received great reviews for the debut album (that now is considered among the classic post-NWOBHM releases) Millennium quickly set about writing and recording new songs. The demo songs for the second album were recorded over three different sessions during 1985 and the line-up was Mark Duffy (vocals), Mike Muskett (guitar), Pete McArdle (guitar), Dave Price (bass), Steve Mennell (drums) and Dave Hardy that replaced Pete McArdle on guitar on the last recording session. Unfortunately, Millennium didn’t secure a record deal for another release and these recordings were locked in a closet for the last 30 years… until now. And Caught In A Warzone is a fine listen indeed. A blazing slug of New Wave of British Heavy Meat which both hits between the eyes and sounds fresh considering the time lapse involved. Hard, heavy, huge riffs, rip snorting solos flying around everywhere, big booming rhythm section and energetic vocals. Proper, proper NWOBHM. Proper, proper rock. How was a band this good with songs like these not picked up by a major label with a big promotion budget? Princess Of The Light is a brutal opener. Check out the intro riffery before it all kicks in. BOOM! Powerchord central, shout-out chorus and the energetic lead breaks and outro. Great! The title track has a nice gentle start though you know that can’t last. It doesn’t. BOOM! again and we’re off to the races and frenetic pace as the cut gallops along like a sort of Maiden/Priest/Sabbath hybrid. The slashing chords of Dance of the Dragonfly is another attention grabber with a hypnotic feel about it. Millennium had a winning album back in 1985 with Caught In A Warzone. Energetic heaviness with a big punch all the way. To bad this never got released back then but at the same time its a major pleasure to be able to hear and enjoy it now more than 30 years later.